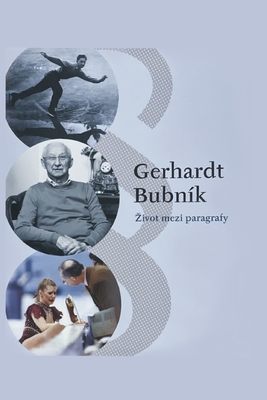 Awarded the Olympic Order and the Prize for the Fight against Doping in Sport from the International Olympic Committee, Bubn k was elected an ISU Honorary Member by the Congress of the International Skating Union. As a sport official, he attended 9 Olympic Winter Games from 1976 through 2014.

As law graduate from Charles University in Prague, Bubn k was the first Czech lawyer to earn a Master of Laws (LL.M.) Degree from the Harvard Law School in the USA. This unique 1968 achievement is described in detail in the Book, along with the anguish of the Author over the 1968 concurrent Russian military invasion of Czech territory to curtail the Prague Spring reforms instituted under the Alexander Dubcek regime.

He has written an autobiography filled with human interest stories detailing successively with:

- his youth under Nazi occupation during WWII, and how the holocaust affected him and his family;

- revelations of brave, compassionate acts of assistance to his family by individual Germans - acts that were later reciprocated in-kind;

- his education and work as a lawyer in Communist Czechoslovakia and during the Cold War, and, in general, daily life behind the Iron Curtain;

- study and life in the USA, first at a US legal-system familiarization course at Princeton, and then at Harvard; and his perceptions and impressions of the U.S.A.;

- his professional work as an international commercial lawyer in the free Czech society and the world after 1989;

- his dedicated fight against doping in sport on both national and international levels;

- his role in the Tonya Harding/Nancy Kerrigan scandal at the 1994 Olympics in Lillehammer;

- his work as an ISU Official Investigator of the judging scandal involving French and Russian Figure Skating Judges at the 2002 Olympics in Salt Lake City;

- meeting Royalty, Heads of State and Prime Ministers; and

The captivating storytelling is accompanied by more than 160 unique photographs, some depicting contemporary documents sent from Nazi concentration camps.

The Book's post-WWII narrative provides genuine insight into the operations of the Czech Communist/Socialist regimes in controlling sport and cultural freedoms of the Czech society, and the methods used to compel conformity to the State party-line.

Bubn k provdes personal accounts of the joys and success experienced, and tragedies suffered, by some top-class, world-famous figure skaters from around the world over a 60-year period (1950-2010). The Author describes how fame and fortune enabled some top figure skaters to leave their ascetic existence and move into the "fast lane" of life with sad - even fatal - results.