Give Me Liberty: The True Story of Oswaldo Payá and his Daring Quest for a Free Cuba (Hardcover) 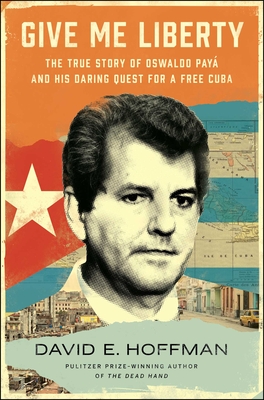 From the Pulitzer Prize–winning Washington Post reporter David E. Hoffman comes the riveting biography of Oswaldo Payá, a dissident who dared to defy Fidel Castro, inspiring thousands of Cubans to fight for democracy.

Oswaldo Payá was seven years old when Fidel Castro seized power in Cuba, promising to create a “free, democratic, and just Cuba.” But Castro instead created an authoritarian regime with little tolerance of free speech or thought. His secret police were trained to crush dissent by East Germany’s ruthless Stasi.

Throughout Cuba’s 20th century history, the dream of democracy was often just within reach, only to be dashed by dictatorship and revived again by a new generation. Payá inherited this dream and it became his life’s work. As a teenager in Communist Cuba, he led a protest against the Soviet-led shattering of the Prague Spring. Before long, he was sent to Castro’s forced labor camps. Payá later became a leading voice of opposition and formed a pro-democracy movement. A devoted Catholic, he championed a simple, bedrock belief that rights are bestowed by God, and not the state. Every day, he witnessed these rights trampled in Cuba. He could not stay silent.

Payá’s most daring challenge to the Cuban government was the Varela Project, a one-page citizen petition demanding free speech, a free press, freedom of association, freedom of belief, private enterprise, free elections and freedom for political prisoners. More than 35,000 people signed the Varela Project, an extraordinary outpouring of protest—with nothing more than pen and paper—against Castro’s decades of despotism. The regime responded by ignoring the petition, arresting dozens of Payá’s followers and sending them to prison for many years. After receiving multiple death threats, Payá was killed in a suspicious car wreck on a remote country road.

Pulitzer Prize–winning reporter David E. Hoffman returns with an epic portrait of a lone individual who had the courage, faith, and persistence to struggle for democracy against an unforgiving dictator. At its heart, Give Me Liberty is a sweeping account of one country’s tragic and continuing struggle for its freedom.

David E. Hoffman is a contributing editor and member of the editorial board of The Washington Post. He was previously assistant managing editor, foreign editor, Jerusalem correspondent, Moscow bureau chief, and White House correspondent for the newspaper. He is the author of The Dead Hand: The Untold Story of the Cold War Arms Race and Its Dangerous Legacy, which won the Pulitzer Prize, The Billion Dollar Spy: A True Story of Cold War Espionage and Betrayal, a New York Times bestseller, and The Oligarchs: Wealth and Power in the New Russia. He lives with his wife in Maryland.

"This is a splendid book, recounting the tragedy of a Cuban, Oswaldo Payá, who dared to oppose Fidel Castro in communist Cuba, and paid dearly for it. Hoffman's research is magnificent and his biography reads like a great novel." — Mario Vargas Llosa, Winner of the 2010 Nobel Prize in Literature

“David Hoffman has written a penetrating account of Cuban history, highlighting the true nature of the Castro regime and the courage of one man who became a threat to it. Through this extraordinary book, the world can now learn the story of Oswaldo Payá and understand why my friend Vaclav Havel nominated him for the Nobel Peace Prize.” — Madeleine K. Albright, United States Secretary of State, 1997-2001

“With his signature flair for joining white-knuckle narrative to meticulous journalism, Hoffman brings us a ground-breaking biography. Hoffman's portrait of Payá offers a sweeping panorama of Castro's Cuba, from its glimmers of promise to its devastating plunge into authoritarianism.” — Marie Arana, author, Bolívar: American Liberator and Silver, Sword, and Stone: Three Crucibles in the Latin American Story

“A pioneering achievement. With seductive and precise prose, Hoffman reveals not only the extent of Payá's personal sacrifice in the struggle for change, but he resurrects the forgotten, traumatic history of Cuban society. Give me Liberty is a gift to all Cubans everywhere.” — Lillian Guerra, Professor of Cuban and Caribbean History, University of Florida, and author of Visions of Power in Cuba: Revolution, Redemption, and Resistance, 1959-1971

“An exhaustively researched and beautifully written exploration of a hero who gave his life to the cause of freedom. A riveting account of courage and perseverance against seemingly insurmountable odds.” — Kenneth Wollack, Chairman, National Endowment for Democracy and former President, National Democratic Institute

“Cuba will one day be free, and when that happens the name of Payá will be remembered for having helped pave the way to democracy... Hoffman's masterful work reminds us that as long as there are those who refuse to give up the demand for fundamental freedoms, there is still hope in even the most repressive of places.” — Michael Abramowitz, President of Freedom House

"Engrossing...an intriguing and often inspiring look at the courage of one man’s convictions."— Publishers Weekly

"Not all resistance to the Castro regime has been offshored to Miami, as this finely detailed study of one of its leading figures demonstrates... A welcome study of political resistance by figures unknown to most readers outside Cuba." — Kirkus Reviews