Extraordinary Canadians: Stories from the Heart of Our Nation (Hardcover) 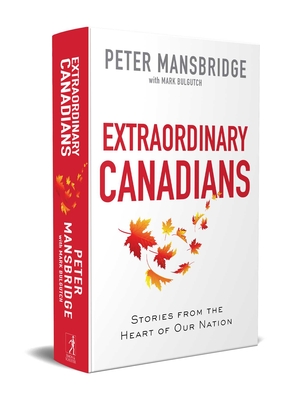 By Peter Mansbridge, Mark Bulgutch (With)
$27.99
Not currently available - email or call for details

From Peter Mansbridge, the beloved former anchor of CBC’s The National, and Mark Bulgutch, former CBC producer, comes a collection of first-person stories about remarkable Canadians who embody the values of our great nation—kindness, compassion, courage, and freedom—and inspire us to do the same.

In this timely and heartwarming volume of personal stories, Peter Mansbridge and former CBC producer Mark Bulgutch bring together inspiring Canadians from across the country, who in their own way, are making Canada a better place for all.

Hear Gitxsan activist Cindy Blackstock describe her childhood in northern British Columbia where she straddled two communities—Indigenous and non-Indigenous—and her subsequent fight for equitable health care for all children as the executive director of the First Nations Child and Family Caring Society. Meet Matt Devlin, the US broadcaster who found a new home in Canada when he got a job with the Toronto Raptors, and read how he helped calm the crowd when a gunman began shooting in Nathan Phillips Square after the team’s NBA championship win. From the young woman living with Crohn’s disease—and proudly modeling her ostomy bag—to the rabbi whose family fled Nazi Germany—and who now gives the benediction on Parliament Hill each Remembrance Day—Extraordinary Canadians celebrates the people who have overcome adversity and broken down barriers to champion the rights and freedoms of everyone who calls Canada home.

Featuring voices from all walks of life—advocates, politicians, doctors, veterans, immigrants, business leaders, and more—this collection gets to the heart of what it means to be Canadian. These stories will change the way you see your country and make you fall in love with Canada all over again.

Peter Mansbridge is one of Canada’s most respected journalists. He is the former chief correspondent for CBC News; anchor of The National, CBC’s flagship nightly newscast where he worked for thirty years reporting on national and international news stories; and host of Mansbridge One on One. He has received over a dozen national awards for broadcast excellence, including a lifetime achievement award from the Academy of Canadian Cinema & Television. He is a distinguished fellow of the Munk School of Global Affairs & Public Policy at the University of Toronto and the former two-term chancellor of Mount Allison University. In 2008 he was made an Officer of the Order of Canada—the country’s highest civilian honour—and in 2012 he was awarded the Queen Elizabeth II Diamond Jubilee Medal. He is the author of the instant #1 national bestsellers Off the Record and Extraordinary Canadians, as well as the national bestseller Peter Mansbridge One on One: Favourite Conversations and the Stories Behind Them. He lives in Stratford, Ontario. Follow him on Twitter @PeterMansbridge, visit him at ThePeterMansbridge.com, or listen to his daily podcast, The Bridge, with Sirius XM Canada.

Mark Bulgutch is a journalist, educator, speaker, and the author of the instant #1 national bestseller Extraordinary Canadians and three other books. He worked for CBC for forty years, eleven as the senior editor of The National and another ten as senior executive producer of all live news specials. He taught at Toronto Metropolitan University for thirty-five years. A regular contributor of opinion columns to The Toronto Star, he has won fourteen Gemini Awards, four RTDNA Awards, the Canadian Journalism Foundation Award of Excellence, and the Canadian Association of Broadcasters Gold Ribbon Award. He lives in Toronto. Follow him on Twitter @MarkBulgutch.

“This collection of greats is astounding. It shows what Canadians do: we think of others and act selflessly, and with great and quiet courage. Superheroes like First Nations children’s advocate Cindy Blackstock and Anishinaabe endocrine surgeon Nadine Caron swelled my chest, assuring me, that they, too, the best of us in Indigenous country, have dedicated their lives to make this nation one of the best in the world. As I read through these pages, I felt that each person formed infinite branches of an eternal maple tree, flickers of the flame that burns bright upon Parliament Hill and within the hearts of all of us.”
— JESSE THISTLE, #1 bestselling author of From the Ashes

“Three words describe the Canadians whose stories are told in this book: courage, resilience, and imagination. The courage to face the unthinkable and take on the impossible. The resilience to pick up when things go wrong and carry on. And the imagination to find new ways of living and giving. These heroes, sung and unsung, teach us what is to be a Canadian. An entertaining and uplifting read.”
— BEVERLEY McLACHLIN, former Chief Justice of Canada and bestselling author of Truth Be Told

“[A] remarkable collection of personal stories about Canadians, many of them unknown to the wider national community, who have helped make this country a better place for all.”
— National Post

“[A] wide range of inspiring stories from the perspective of seventeen Canadians who aren't necessarily well-known but have made a difference in their own ways across the country.”
— The Canadian Press

“One of the book’s many strengths is the way the authors let their subjects discuss their achievements within the full context of their lives, alongside failures, frustrations, and disappointments of all sorts. The achievements are diverse in nature, but share a theme: they found their strength and calling, in fighting conditions that initially seemed insurmountable. The range and diversity of the subjects is a tribute to their legwork— and the composition and diversity of this country. It is in essence a love letter to his country.”
— Policy Magazine

“A welcome exposure to an abundance of goodness afoot in Canada . . . Fresh and illuminating . . . The book especially deserves its own stamp of ‘extraordinary’.”
— Winnipeg Free Press