The Man in Black (Stephen King's The Dark Tower: The Gunslinger #5) (Hardcover) 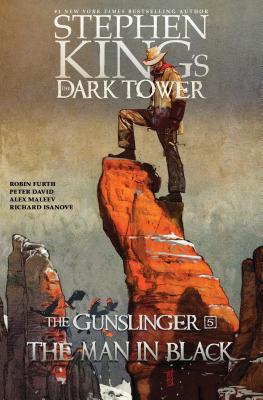 Enter once more the world of Roland Deschain—and the world of the Dark Tower…presented in a stunning graphic novel form that will unlock the doorways to terrifying secrets and bold storytelling as part of the dark fantasy masterwork and magnum opus from #1 New York Times bestselling author Stephen King.

Roland closes in at last on his elusive nemesis, the Man in Black. At Roland’s side is his newest ka-tet-mate, Jake Chambers—a boy from some strange other Earth of subways, turnpikes, and fluorescent lights. But to reach the Man in Black—and save the Dark Tower—Roland is prepared to risk it all. His life…his very soul…and even Jake on this final leg of a treacherous journey, to the destiny Roland has pursued for many long years….