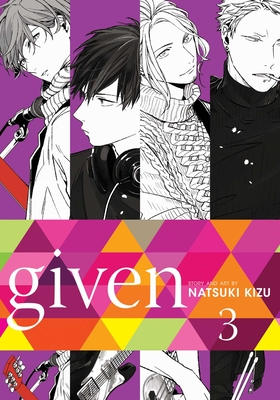 This is book number 3 in the Given series.

Sometimes a song can save your life.

Love of music unites the four members of the band Given: hotheaded guitarist Uenoyama, playboy drummer Akihiko, gentle bassist Haruki, and Mafuyu, a singer gifted with great talent and burdened by past tragedy. Their struggles and conflicts may drive them apart, but their bond to the music—and to one another—always brings them back together again.

Uenoyama realizes he’s in love with Mafuyu and steals a kiss from him backstage at their first live performance. But now he’s even more confused—he hasn’t shared his feelings with Mafuyu and has no idea how Mafuyu feels about him. In contrast to their naive romance, Haruki has been harboring a secret desire for bandmate Akihiko, who’s already entangled in an intense, conflicted relationship with someone else.

Natsuki Kizu made her professional debut in 2013 with Yukimura Sensei and Kei-kun, followed by the short story collection Links and her breakout series, Given, which has been adapted into drama CDs and an animated TV series. To find out more about her works, you can follow her on Twitter at @kizu_ntk.

“Will grab your feels and refuse to let go.”—BookRiot, BEST MANGA 2020: NEW TITLES TO CHECK OUT THIS YEAR
— BookRiot