The PAN Trilogy (The Complete Series): YA Omnibus Edition (Paperback) 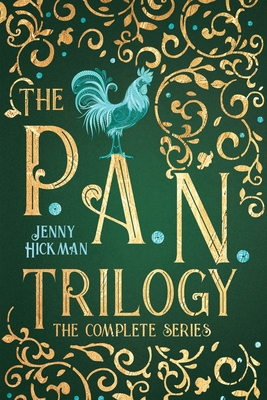 The PAN Trilogy (The Complete Series) YA Omnibus Edition, contains all three books in The PAN Trilogy: The PAN, The HOOK, and The CROC.

With high-flying adventure, a dash of science fiction, and a whole lot of angst, this YA Romance reimagines the Peter Pan story, bringing the tale into the 21st century.

Since her parents were killed, Vivienne has always felt ungrounded, shuffled through the foster care system. Just when liberation finally seems possible-days before her eighteenth birthday-Vivienne is hospitalized with symptoms no one can explain. The doctors may be puzzled, but Deacon, her mysterious new friend, claims she has an active Nevergene. His far-fetched diagnosis comes with a warning: she is about to become an involuntary test subject for Humanitarian Organization for Order and Knowledge-or H.O.O.K. Vivienne can either escape to Neverland's Kensington Academy and learn to fly (Did he really just say fly?) or risk sticking around to become a human lab rat. But accepting a place among The P.A.N. means Vivienne must abandon her life and foster family to safeguard their secrets and hide in Neverland's shadows... forever.

Tomorrow isn't promised, no matter how immortal you think you are.

In the aftermath of Vivienne's capture, she discovers she's destined to become one of the Forgetful P.A.N. The devastating diagnosis leaves her questioning her relationships-and her place in Neverland. While on her second recruitment mission, she ignores a cardinal rule, and one of her fellow P.A.N. pays the ultimate price for her mistake. Outrage over the death spurs Lee Somerfield's growing rebellious faction to fight fire with fire, leaving H.O.O.K. in ashes and Neverland ripped apart from within. Navigating new love and old secrets, Vivienne must now face the consequences of her actions and decide if living forever is worth forgetting everything.

Some secrets are better off forgotten.

With forgetfulness looming, Vivienne is forced to make tough decisions regarding her relationship-and her immortality.Deacon watches helplessly as the woman he loves descends into forgetfulness. After secrets from his past are exposed, he finds out that one of those closest to him has betrayed his trust. As the PAN search desperately for a cure to save the forgetful, HOOK is willing to go to deadly lengths to get what they want.In the end, Neverland will never be the same.

(Content and Trigger Warnings: loss of parents, grief, underage alcohol use, moderate language, discussions surrounding suicide and rape, forced captivity, and some sexual content that may not be suitable for younger readers. These books rate 3, 4, and 4.5 on the Romantic Content Rating System (RCRS), respectively. Recommended 15+)