Bessie Stringfield: Tales of the Talented Tenth, no. 2 (Paperback) 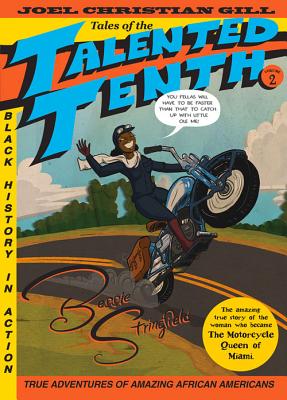 Imagine a five-foot-two-inch-tall woman riding a Harley eight times across the continental United States. Now imagine she is black and is journeying across the country in the pre-Civil Rights era of the 1930s and ’40s. That is the amazing true story of Bessie Stringfield, the woman known today as The Motorcycle Queen of Miami and the first black woman to be inducted into the American Motorcyclist Association Hall of Fame and the Harley Davidson Hall of Fame. Stringfield was a pioneer in motorcycling during her lifetime; she rode as a civilian courier for the US military and founded the Iron Horse Motorcycle Club in Miami, all while confronting and overcoming Jim Crow in every ride.

Joel Christian Gill is the Chair of Foundations at the New Hampshire Institute of Art and recipient of the 2016 Boston University College of Fine Arts Alumni Award. He is the author of Strange Fruit, Volume I: Uncelebrated Narratives from Black History and Bass Reeves: Tales of the Talented Tenth, No. 1. Joel received his MFA from Boston University and a BA from Roanoke College. His secret lair is behind a secret panel in the kitchen of his house (sold separately) in New Boston, New Hampshire where he lives with his wife, four children, talking dog, and two psychic cats. Visit his website at joelchristiangill.wordpress.com or connect with him on Twitter (@jcg007). Gill believes that 28 days are not enough when it comes to Black History. Join the discussion on social media by following Joel's #28DaysAreNotEnough, his call-to-action about Black History. Sheena C. Howard is an award- winning author, filmmaker and scholar. In 2014 Sheena became the first Black woman to win an Eisner Award for her first book, Black Comics: Politics of Race and Representation. She is also the author of The Encyclopedia of Black Comics.

"Joel Christian Gill is a modern day graphic griot. His mastery of visual storytelling coupled with his tireless research make him one of the most important artist/scholars working today." —John Jennings, Eisner-nominated comics scholar and award-winning graphic novelist

"Gill delivers the story of her diasporic roots and struggle from childhood to adulthood with artistic brilliance and compelling wit. Like Stringfield, Gill asserts himself as a messenger; he is bringing together multiple generations of readers who now have an opportunity to read and view Blackness and Black historical figures anew." —Deborah Elizabeth Whaley, author, Black Women in Sequence: Re-inking Comics, Graphic Novels, and Anime

"A great story that should be heard by all, starting with our youngest generations." —J.A. Micheline, contributor, A.V. Club and Women Write About Comics

"An incredible true story that has as much power as Bessie and the motorcycles she rode." —Kirkus Reviews starred review

"This quick-paced biography of Bessie Stringfield, the so-called 'Motorcycle Queen of Miami,' is a pocketful of cheerful, hard-fought optimism." —Publishers Weekly

"The little known story of an African American woman crossing the country eight times during the 1930s and 40s is remarkable enough. The fact that Bessie Stringfield did it—alone—on a motorcycle is downright astonishing." —Word of Mouth, NHPR

"Books for Holiday Gift Giving in 2016. A graphic-novel-style biography of Stringfield, known as the Motorcycle Queen of Miami, who roamed the country on her Harley in the pre-Civil rights '30s and '40s. For readers 12 and older." —Milwaukee Journal Sentinel

"This is a great biography for readers 12 and up, and could be a good gift for a Motorcycle Mama of a higher age. For them, or for anyone who wants to learn about an interesting, little-known story, Bessie Stringfield: Tales of the Talented Tenth, is the book to see." —Terri Schlichenmeyer, postnewsgroup.com