Nyx in the House of Night: Mythology, Folklore and Religion in the PC and Kristin Cast Vampyre Series (Paperback) 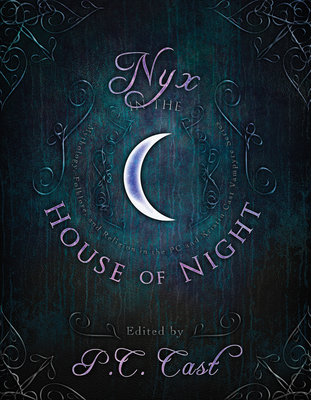 Companion to the #1 New York Times bestselling House of Night books, soon to be adapted into a Netflix series

The House of Night is no ordinary school—and not just because it's for vampyres. It's a place where magic, religion, folklore, and mythology from multiple traditions merry meet and meld to create something incredible and new.

Travel with P.C. Cast as she gets her first tattoo in Ireland, climbs the ruins of Sgiach's castle, and discovers the lore that led to the Isle of Skye vampyres. Read Kristin Cast's defense of women in history and mythology who, like Zoey, have made a practice of juggling multiple men. Sit in on a vampyre lecture by Bryan Lankford, the real-life basis for House of Night instructor Dragon Lankford, on the parallels between Wiccan and vampyre circle rituals. Tour Tulsa's House of Night landmarks with local Amy H. Sturgis.

• Karen Mahoney on Nyx and other goddesses of the night
• John Edgar Browning on vampires in folklore, fiction, and reality
• Jana Oliver on tattoos and other Marks
• Ellen Steiber on feline familiars
• Yasmine Galenorn on priestesses and goddess worship
• Jordon Dane on Zoey's Cherokee heritage
• Jeri Smith-Ready on the Raven Mockers and Kalona's less than heavenly inspiration
• Christine Zika on the connection between Nyx and the Virgin Mary
• Triniy Faegen on the Greek version of the Otherworld

Nyx in the House of Night also includes an appendix of character names that reveals the myth behind Zoey's last name, which House of Night cats have ties to Camelot, Egypt, and Middle-earth, and more!

P.C. Cast is an award-winning fantasy and paranormal romance author, as well as an experienced speaker and teacher. In addition to her New York Times bestselling paranormal YA series for St. Martin's, The House of Night, she writes the popular Goddess Summoning Books for Berkley, and epic fantasy novels set in the world of Partholon for LUNA. Her novels have been awarded the prestigious: Prism, Holt Medallion, Daphne du Maurier, Booksellers' Best, and Laurel Wreath.

Currently she lives and teaches in Oklahoma with her talented daughter who is attending college, her spoiled cat (who has refused higher education), and her Scottie dogs – better known as The Scottinators. Ms. Cast loves to hear from her fans and can be reached through her website, pccast.net.