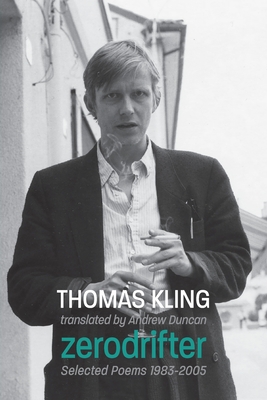 Thomas Kling (1957-2005) was born in Bingen am Rhein, near Frankfurt, grew up in Hilden, and went to school in D sseldorf. He later lived in Vienna, Finland and Cologne, and finally settled down as a freelance writer near Neuss, living in a house on a decommissioned NATO missile station in Hombroich. As well as numerous collections of poems he also published translations of Catullus and was editor of the anthology Sprachspeicher. 200 Gedichte auf deutsch vom achten bis zum zwanzigsten Jahrhundert (Language Storage. 200 Poems in German from the 8th to the 20th Century, 2001). Thomas Kling died on 1 April 2005 at the age of 47, a victim of lung cancer, by then recognised as one of the most important German-language poets of his time. He had come to wide recognition in the 1980s, gaining renown for performances of his work (which he referred to as "speech-installations", rather than as readings) and was one of the main forces behind the renovation of contemporary German poetry that occurred at that time, for which he reached back to the expressionist era and also to the post-war Viennese avant-garde, which had previously gained little traction in Germany. He was awarded the Else Lasker-Sch ler Prize, the Peter Huchel Prize, and the Ernst Jandl Prize. His Collected Poems (Gesammelte Gedichte 1981-2005) was published in 2006. This is the first volume of his work to be published in English.