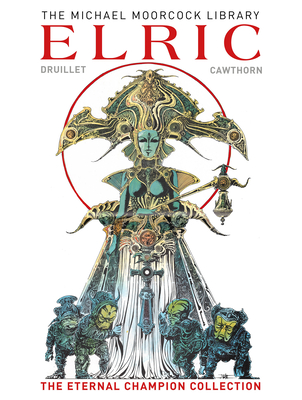 Born in London in 1939, Michael Moorcock now lives in Texas. A prolific and award-winning writer with more than eighty works of fiction and non-fiction to his name, he is the creator of Elric, Jerry Cornelius and Colonel Pyat, amongst many other memorable characters. In 2008, The Times named Moorcock in their list of "The 50 greatest British writers since 1945".

Philippe Druillet is a comics artist and writer, known for his innovative approach to visual design. Since the start of his career in 1966, Druillet has won multiple awards, including the European Sci-Fi award for comics in 1972, The Grand Prize for a Science Fiction Franchise in 1976, in 1990 he was inducted into the European Science Fiction Society Hall of Fame for his artistry, and in 1996 he won the National Art and Graphics Grand Prize. In the US, he's best known for his graphic adaptation of Michael Moorcock's hit fantasy series, Elric, the Return to Melnibone, and his work for Heavy Metal, such as City of Flowers.

James Cawthorn has had a long working relationship with Michael Moorcock, illustrating his prose serials, and the comic strip Planet Peril, and writing the three-part serial Handar the Red in Tarzan Adventures, and illustrating for the Sexton Blake Library. He drew covers and interior illustrations for the science fiction magazine New Worlds from 1964, and worked with Moorcock on a variety of magazines in the 70s, drawing The Sonic Assassins, a comic strip based on the band Hawkwind, in Frendz. He drew graphic novels adaptations of Moorcock stories, including Strombringer, The Jewel in the Skull, and The Crystal and the Amulet.

“Transcends sword and sorcery and steps into the mythic levels of action, deceit, and deities ... It should go without saying that Michael Moorcock’s writing is second to none. He is the eternal champion of sword and sorcery writing, and it is a treat to anyone interested in this genre to be able to access these collections” - But Why Tho