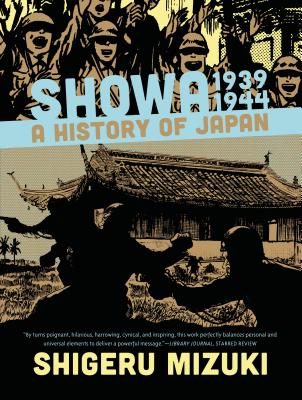 By Shigeru Mizuki, Zack Davisson (Translated by)
$24.95
Not currently available - email or call for details

This is book number 2 in the Showa: A History of Japan series.

Born March 8, 1922 in Sakaiminato, Tottori, Japan, Shigeru Mizuki is a specialist in stories of yokai and is considered a master of the genre. He is a member of the Japanese Society of Cultural Anthropology, and has traveled to more than sixty countries around the world to engage in fieldwork on the yokai and spirits of different cultures. He has been published in Japan, South Korea, France, Spain, Taiwan, and Italy. His award-winning works include Kitaro,Nonnonba, and Onward Towards Our Noble Deaths. Mizuki's four-part autobiography and historical portrait Showa: A History of Japan won an Eisner Award in 2015.

“In [Showa], legendary manga artist Mizuki draws an exaggerated, hyper-cartoony version of himself amid some of the grimmest realities of 20th Century Japan, and lets that tension work a sly, revelatory magic.” —NPR

“Shigeru Mizuki's Showa 1939–1944: A History of Japan [is] an unflinching history of the harsh realities of the war year's in Japan by a Japanese veteran.” —Publishers Weekly Spring 2014 Top Ten

“Passionate and meticulously researched (with copious explanatory footnotes and endnotes) Showa is an astounding and sweeping epic, and a must-read. It offers an indelible and engaging combination of human storyline, riveting life-and-death plot twists, historical education and passionately conveyed moral messaging on the horrors of war.” —Popmatters