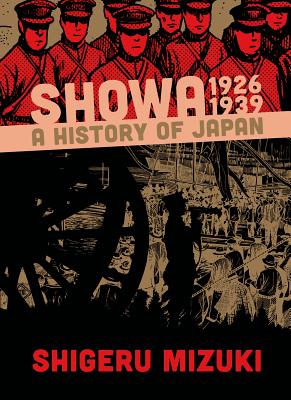 By Shigeru Mizuki, Zack Davisson (Translated by)
$24.95
Not currently available - email or call for details

This is book number 1 in the Showa: A History of Japan series.


Showa 1926–1939: A History of Japan is the first volume of Shigeru Mizuki's meticulously researched historical portrait of twentieth-century Japan. This volume deals with the period leading up to World War II, a time of high unemployment and other economic hardships caused by the Great Depression. Mizuki's photo-realist style effortlessly brings to life the Japan of the 1920s and 1930s, depicting bustling city streets and abandoned graveyards with equal ease.
When the Showa era began, Mizuki himself was just a few years old, so his earliest memories coincide with the earliest events of the time. With his trusty narrator Rat Man, Mizuki brings history into the realm of the personal, making it palatable, and indeed compelling, for young audiences as well as more mature readers. As he describes the militarization that leads up to World War II, Mizuki's stance toward war is thoughtful and often downright critical—his portrayal of the Nanjing Massacre clearly paints the incident (a disputed topic within Japan) as an atrocity. Mizuki's Showa 1926–1939 is a beautifully told history that tracks how technological developments and the country's shifting economic stability had a role in shaping Japan's foreign policy in the early twentieth century.

Born March 8, 1922 in Sakaiminato, Tottori, Japan, Shigeru Mizuki is a specialist in stories of yokai and is considered a master of the genre. He is a member of the Japanese Society of Cultural Anthropology, and has traveled to more than sixty countries around the world to engage in fieldwork on the yokai and spirits of different cultures. He has been published in Japan, South Korea, France, Spain, Taiwan, and Italy. His award-winning works include Kitaro,Nonnonba, and Onward Towards Our Noble Deaths. Mizuki's four-part autobiography and historical portrait Showa: A History of Japan won an Eisner Award in 2015.

“A powerful, maddening and at times bitterly funny war story--a revealing look at World War II from the opposite side.” —Dan Kois, NPR

“Shigeru Mizuki is one of Japan's greatest illustrators, a master of both realism and manga.” —The Globe and Mail