Heart Wood: Four Women, for the Earth, for the Future (Paperback) 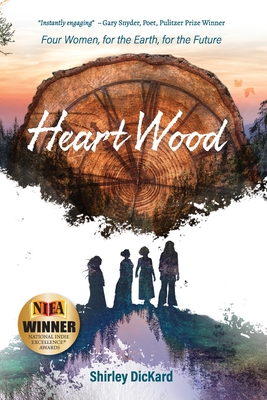 Deep in the heart of a small, oak writing desk is a legacy that mysteriously connects three family women across centuries and generations in their fight for the future. Shima'a, an ancient woman with disturbing visions of the Earth's demise, sends a message of warning and a seed of hope forward in time within the heart of an acorn to three family women: Eliza: Post Gold Rush in the Sacramento Valley, late 19th century - Harmony: Back-to-the-land homestead in the Sierra Nevada, late 20th century - Amisha: Dystopic San Francisco and the Sierra Nevada, late 21st century. Writing on the heartwood of the old desk, each woman is influenced by the ancient message as she views mankind's escalating destruction of the natural world through the eyes of her time. The women learn to listen to the silence, hold the earth in their hands, gather the women, then do what must be done. Heart Wood is a compelling family saga set in the foothills of California's Sierra Nevada. Its characters shift from one generation to the next, as do the struggles they face in saving their homestead from the ravages of climate change, fire, and human greed. But it is mankind that poses the most dire challenges to the land and to those who seek life upon it. Heart Wood speaks of the collective power of feminine energy to protect the Earth. If you feel you're not doing enough or that it's already too late to make a difference, Heart Wood may give you hope. An eco-speculative-historical-mystical-feminist novel.