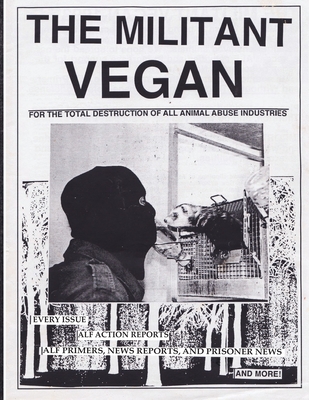 By Animal Liberation Front (Contribution by), Peter Young (Introduction by)
$8.34

Together in one professionally-bound book, for the first time.

The Militant Vegan was a low-production-value, limited-circulation, photocopied publication that ran from 1993 to 1995, and never enjoyed a wide audience. This is the complete collection of the animal liberation zine covering direct action, animal rights activism, and the Animal Liberation Front (ALF).

To understand The Militant Vegan is to understand the historical context from which it arose: By 1993, the Animal Liberation Front had carried out its most strategic campaign to date, targeting weak points in the fur industry in a multi-state liberation and arson spree called Operation Bite Back. The media was all but silent. There was no internet, so activists outside the small media markets where these raids happened were unaware this campaign was underway, and many of the raids weren't reported by the media at all. The Animal Liberation Front (again, pre-internet) had little-to-no platforms to which they could disseminate their communiques, rally the movement to join them in taking action, or let the world know of their victories.

Before the internet, animal liberation news could only be spread through photocopied documents like The Militant Vegan, distributed person-to-person, and seen by few.

While dominated by re-purposed material (such as ALF primers and newspaper clippings), there is also notable content, ALF history, and other direct-action themed rarities contained in these pages. Some of it never to be found elsewhere.

The Militant Vegan published some of the first publicized fur farm addresses - several of which would go on to be raided by activists. A communiqu for the Malecky Mink Farm arson (also part of Operation Bite Back) is a rare piece of ALF history. And even the grainy newspaper article reprints can't be downplayed, in a time when to not live in an area where an ALF action had occurred was to never know it happened at all - were it not for The Militant Vegan.

In the mid-1990s, reading The Militant Vegan was like a window to a secret history you watched unfold in its pages.