Defending the Free Market: The Moral Case for a Free Economy (Paperback) 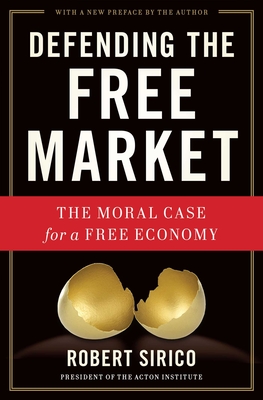 Thirty years ago, the economic system of the Soviet empire—socialism—seemed definitively discredited. Today, the most popular figures in the Democratic Party embrace it, while the shapers of public opinion treat capitalism as morally indefensible.

Is there a moral case for capitalism? Consumerism is an appalling spectacle. Free markets may be efficient, but are they fair? Aren’t there some things that we can’t afford to leave to the vicissitudes of the market

Robert Sirico, a onetime leftist, shows how a free economy—including private property, legally enforceable contracts, and prices and interest rates freely agreed to by the parties to a transaction—is the best way to meet society’s material needs. In fact, the free market has lifted millions out of dire poverty—far more people than state welfare or private charity has ever rescued from want.

But efficiency isn’t its only virtue. Economic freedom is indispensable for the other freedoms we prize. And it’s not true that it makes things more important than people—just the reverse. Only if we have economic rights can we protect ourselves from government encroachment into the most private areas of our lives—including our consciences.

Defending the Free Market is a powerful vindication of capitalism and a timely warning for a generation flirting with disaster.

Rev. Robert A. Sirico is a Roman Catholic priest and the president and co-founder of the Acton Institute, a think-tank dedicated to promoting a free-market economic policy framed within a moral worldview. He is the author of several books, including Defending the Free Market: The Moral Case for a Free Economy, and his writings have been featured in the New York Times, the Wall Street Journal, Forbes, the London Financial Times, and National Review, among numerous other publications. Fr. is regularly called upon to discuss economics, civil rights, and issues of religious concern and has provided commentary for CNN, ABC, the BBC, NPR, and CBS’ 60 Minutes.