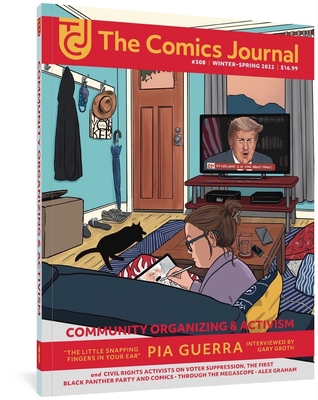 This issue of the award-winning magazine focuses on the intersections of comics and activism. Gary Groth interviews editorial cartoonist Pia Guerra (Y: The Last Man); Civil Rights activists talk about the creation of the Black Panther Party symbol and their tactics to battle voter suppression; and much more.

In this issue, Gary Groth conducts a career-spanning interview with Y: The Last Man comics artist Pia Guerra about her turn to editorial cartooning and future projects. John Jennings explores the vision behind the graphic imprint Megascope, devoted to "rediscovering powerful speculative work by and about people of color." Jennie S. Law interviews Civil Rights activists Jennifer Lawson and Courtland Cox about their ingenious strategies — comics pamphlets about gaining political power, going undercover, mass meetings — to register voters in Lowndes County circa 1965. Nicknamed "Bloody Lowndes," 80% of its population was Black, yet only two Black people were registered to vote. Also: a gallery of Frank Leet's one-panel cartoons illustrating Don Marquis's (Archy and Mehitabel) verse, a conversation with Alex Graham about self-publishing a 400-page graphic novel, a Rob Guillory (Chew, Farmhand) sketchbook, an original comic by Meg O'Shea, and more.

American Canadian dual citizen Pia Guerra, b. 1971, is best known as the artist for the comics series Y: The Last Man, written by Brian K. Vaughan. The TV adaptation aired in September 2021 on FX. She’s also drawn Dr. Who, Black Canary, and Simpsons comics and contributed to Mad magazine. Her political cartoons have appeared in venues such as The Washington Post, The New Yorker and The Nib.

Gary Groth is the co-founder of The Comics Journal and Fantagraphics Books. He lives in Seattle.

Rachel R. Miller earned her Ph.D. from The Ohio State University, where she was a Presidential Fellow and served as the Assistant Editor of Inks: The Journal of the Comics Studies Society. Her writing on comics and pop culture has been published in Public Books, Bitch Planet, Pretty Deadly, American Book Review, as well as many scholarly collections on comics and comics history. She co-curated the exhibit Ladies First: A Century of Women’s Innovations in Comics and Cartoon Art for the Billy Ireland Cartoon Library and Museum, which documents one hundred years of women’s work in comics and cartoon art. Her first book, An Introduction to American Comics, co-authored with Dr. Andrew Kunka, is forthcoming from Routledge.

Kristy Valenti is an Eisner-Award-winning editor at Fantagraphics Books. She lives in Seattle.

The Comics Journall [is the] storied arbiter of the indie-comics world.