Ninety Miles and a Lifetime Away: Memories of Early Cuban Exiles (Hardcover) 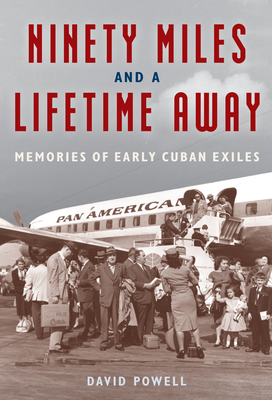 By David Powell
$30.00
Not currently available - email or call for details

Rare accounts of Cuban migration
in the words of the exiles themselves
Bringing
together an unprecedented number of extensive personal stories, this book
shares the triumphs and heartbreaking moments experienced by some of the first
Cubans to come to the United States after Fidel Castro took power in 1959. Ninety Miles and a Lifetime Away is a moving look inside fifteen years of migration that changed the two
countries and transformed the lives of the people who found themselves
separated from their homeland. David Powell presents
interviews with refugees who left Cuba between 1959 and the 1962 Missile
Crisis, as well as those who embarked on the Freedom Flights of the late 1960s
and early 1970s. During these years more than 600,000 Cubans migrated to the
US, some by way of other countries and many arriving in Miami with only a few
clothes and pocket money. In their own words, exiles describe why they left the
island, how they prepared for departure, what situations they faced when they
arrived in the US, and how they integrated into American life.
Offering historical
background that illuminates this pivotal period in the context of the Cold War,
Powell shows how the US government's Cuban refugee assistance program had
far-reaching effects on refugee policy, bilingual education, and child welfare
programs. The testimonies in this book include new information about low-cost
"Cuban Loans" that enabled young exiles to attend US colleges, preparing many
to be builders and leaders in their adopted country today.
A powerful
portrayal of the initial effects of a revolution that began a new era in Cuba's
relationship with the world, this book preserves rare accounts of the
motivations and struggles of early Cuban exiles in the words of the emigres
themselves, adding gripping detail to the history of the modern Cuban diaspora.

Publication of this work made possible by a Sustaining the Humanities through the American Rescue Plan grant from the National Endowment for the Humanities.