The Revolution that Wasn't: My Candid Observations about the Shared Cuba and US Histories (Paperback) 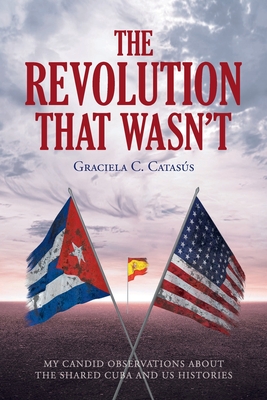 By Graciela C. Catasã°s
$23.95
Not currently available - email or call for details

While this work tries to be a primer in Cuban history in its relationship with its northern neighbor and mentor, the United States, before the Castro takeover, it is a great deal more. Aside from relating her experiences growing up in La Habana, the author documents Cuba's excellent economic strides and outstanding placement among Latin American and international nations, great educational system, and the impressive 1940 Constitution. The book aims at debunking the myth that Cuba required a revolution to cure any economic ills and/or that the Castro revolution delivered any improvements to the island.

In the process of relating the history of Cuba from its discovery by Columbus in 1492 through its travails seeking independence from Spain, and later being incorporated to the United States as a protectorate before its independence; many interesting political twists and turns are uncovered, along with glimpses into the actions of presidents, military men, politicians, US newspaper barons, and even spies. Throughout these developments, aspects of the Cuban national character that help explain much of what unfolded in January 1959 are exposed as well as, a US White House perpetrator who has largely escaped historical scrutiny.

Even though the Castro takeover of the island came to be on January 1959, this was not a disconnected occurrence; as several generally unidentified issues had been flying under the radar, helping to generate this seizure of power. Also, when considering the continuous United States meddling into Cuba's national affairs before and after its independence; as well as its veiled support for the Castro forces but, last-minute refusal to interfere in Cuba's affairs to preclude the imminent Castro Communist occupation, a clearer picture of the real culprit comes into focus.

Lastly, this book is about fairness, learning from history, and personal growth; as the author describes her evolution from a seventeen-year-old Cuban refugee in 1959 into an acculturated United States citizen, who understands her adopted country's history and democratic form of government and the similar hopes she holds for her fellow Cuban Americans, alongside a yearning for long-overdue historical justice.