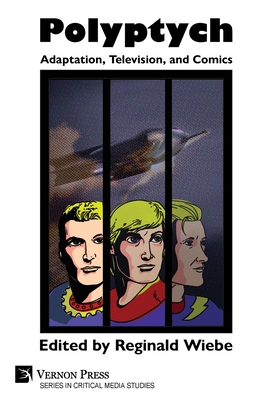 By Reginald Wiebe (Editor)
Not currently available
Usually arrives at our store in 2-8 business days.

Through each of its chapters, 'Polyptych: Adaptation, Television, and Comics' examines the complex dynamics of adapting serialized texts. The transmedial adaptation of collaborative and unstable texts does not lend itself to the same strategies as other, more static adaptations such as novels or plays. Building off the foundational work of Linda Hutcheon and G rard Genette, Polyptych considers the analogy of adaptation as a palimpsest-a manuscript page that has been reused, leaving traces of the previous work behind-as needing to be reevaluated. A polyptych is a multi-panel artwork and provides a new model for analyzing how adaptation works when translating collaborative and unstable texts. Given that most television and comic books are episodic and serialized, and considering that both media are also the cumulative work of many artists, this book offers a series of distanced readings to reassess how adaptation works in this field. Comic book adaptations on television are plentiful and are nearly completely ignored in critical discussions of adaptation.

This collection focuses on texts that fall outside the most common subjects of study among the corpus and contributes to expanding the field of inquiry. The book features texts that are subjects of previous academic interest, as well as studies of texts that have never before been critically considered. It also includes an appendix that provides the first list of comic book adaptations on North American television. 'Polyptych' is a unique and timely contribution to dynamic and growing fields of study.

The book will be of interest to scholars and researchers in the fields of Comic Studies, Adaptation Studies, and Critical Media Studies more broadly, as well as to students undertaking courses on these subjects. It will also appeal to comic book and pop culture fans who wish to expand their knowledge on the subject.