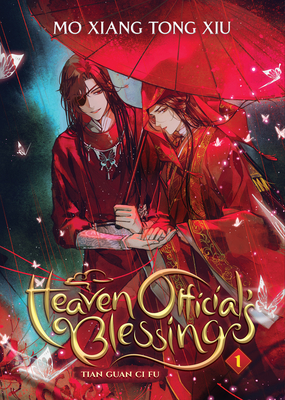 This epic historical fantasy about a prince and the mysterious man by his side is now in English, for the very first time.

Born the crown prince of a prosperous kingdom, Xie Lian was renowned for his beauty, strength, and purity. His years of dedicated study and noble deeds allowed him to ascend to godhood. But those who rise may also fall, and fall he does--cast from the heavens and banished to the world below.

Eight hundred years after his mortal life, Xie Lian has ascended to godhood for the third time, angering most of the gods in the process. To repay his debts, he is sent to the Mortal Realm to hunt down violent ghosts and troublemaking spirits who prey on the living. Along his travels, he meets the fascinating and brilliant San Lang, a young man with whom he feels an instant connection. Yet San Lang is clearly more than he appears... What mysteries lie behind that carefree smile?

This Chinese xianxia fantasy novel series built around the romanticized love between two men (danmei) is the newest work from author Mo Xiang Tong Xiu, and has spawned an ongoing multimedia franchise that's beloved across the world--including the animated series (donghua) that amassed 100+ million views in just its first month. The Seven Seas English-language edition will include covers from 日出的小太陽 (tai3_3), and exclusive, all-new interior illustrations from ZeldaCW.