Of Ostriches and Lemmings: The Silliness of Climate Change Hysteria (Hardcover) 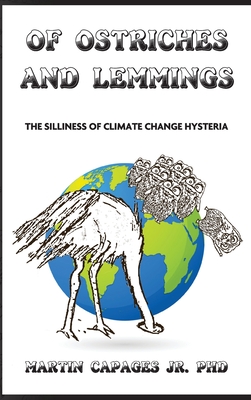 The history of the science of Climate Change from the perspective of a bunch of hogs.

The world has never experienced a method of mass communication as instantaneous as that provided by the Internet. Unfortunately, it has also sped up the ability for lies to spread. "A Lie will go around the world while Truth is pulling its boots on." This proverb was mostly likely penned by Jonathan Swift in 1710 and eloquently restated by Charles Haddon Spurgeon in 1855. Now that lies can spread instantaneously, what recourse does Truth have? Truth must be patient and steady. Truth cannot go on offense. To call a lie a lie is to lose one's own credibility. Truth must slowly reveal itself.

Ostriches do not really hide their heads in the sand on the hope that some approaching danger will just go away. They are really just pecking at the ground for food and grit for their gizzards to aid in digestion. Lemmings do not stampede in a blind panic to their death over a cliff. They just get over-populated in one area from time to time and migrate in mass to another area that is more appealing. But a compelling documentary film can change the public perception. In 1958, Disney produced a film on Nature that showed lemmings rushing over a cliff to their death in the sea. The producers of the documentary herded the poor lemmings to the cliff. It was spectacular but false. Al Gore and Sir David Attenborough did the same thing with polar bears. So, you see, it is really just Created Myth versus Actual Truth.