The Health Gap: The Challenge of an Unequal World (Hardcover) 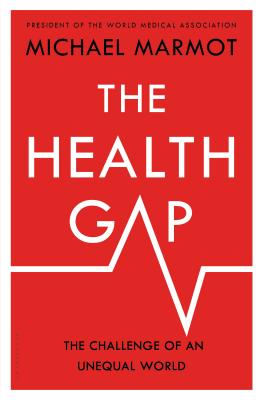 In this groundbreaking book, Michael Marmot, president of the World Medical Association, reveals social injustice to be the greatest threat to global health

In Sierra Leone, one in 21 fifteen-year-old women will die in her fertile years of a maternal-related cause; in Italy, the figure is one in 17,100; but in the United States, which spends more on healthcare than any other country in the world, it is one in 1,800 (and now, with the new administration chipping away at Obamacare, the statistics stand to grow even more devastating). Why?

Dramatic differences in health are not a simple matter of rich and poor; poverty alone doesn't drive ill health, but inequality does. Indeed, suicide, heart disease, lung disease, obesity, and diabetes, for example, are all linked to social disadvantage. In every country, people at relative social disadvantage suffer health disadvantage and shorter lives. Within countries, the higher the social status of individuals, the better their health. These health inequalities defy the usual explanations. Conventional approaches to improving health have emphasized access to technical solutions and changes in the behavior of individuals, but these methods only go so far. What really makes a difference is creating the conditions for people to have control over their lives, to have the power to live as they want. Empowerment is the key to reducing health inequality and thereby improving the health of everyone. Marmot emphasizes that the rate of illness of a society as a whole determines how well it functions; the greater the health inequity, the greater the dysfunction.

Marmot underscores that we have the tools and resources materially to improve levels of health for individuals and societies around the world, and that to not do so would be a form of injustice. Citing powerful examples and startling statistics (“young men in the U.S. have less chance of surviving to sixty than young men in forty-nine other countries”), The Health Gap presents compelling evidence for a radical change in the way we think about health and indeed society, and inspires us to address the societal imbalances in power, money, and resources that work against health equity.

Sir Michael Marmot is Professor of Epidemiology and Public Health at UCL, a leading intellectual both in the UK and globally. He will take up the Lown visiting professorship at Harvard in 2015. He chaired the WHO Commission on Social Determinants of Health (2005-8), his recommendations have been adopted by the World Health Assembly and taken up by many countries and the British Government appointed him to conduct a review of social determinants and health inequalities. The Marmot Review and its recommendations are now being implemented in three-quarters of local authorities in England. He previously published Status Syndrome in 2004.

“Michael Marmot’s path-breaking work on the social determinants of health has made all of us rethink healthcare and social medicine. This is a lesson of tremendous practical importance to the world.” —Amartya Sen

"Marmot convincingly details how socioeconomic inequities lead to health inequities . . . [He] passionately argues for people everywhere to promote a more 'just distribution of health' . . . Like a good courtroom attorney, Marmot builds a strong case and calls for action." —Booklist

"[T]he author creates a strong case for policy changes that address human needs for autonomy, empowerment, and freedom in order to improve the well-being of people globally who are living in vulnerable and disadvantaged circumstances." —Library Journal

"[Marmot's] research over the years has generated a catalogue of shocking headline findings, which are collected in this book to devastating effect. Page after page rams home the message that the poorer you are, the more likely you are to live a shorter, less healthy and in all likelihood less happy life . . . The Health Gap briskly and coherently explores why this might be the case . . . But Marmot is no doom-monger. Quite the opposite . . . this is a fundamentally optimistic book." —The Independent

"Dr. Marmot weaves a masterful treatise on world financial and trade policy, availability of education to all people, and the robustness of infrastructure to support health status . . . To learn more about creative initiatives throughout the world that are improving conditions for human beings, buy this book, a bargain at any price." —New York Journal of Books

"Now's the time to . . change the way we think about health. In his new book, UCL professor Michael Marmot reveals that the average person would have eight extra years of healthy life if they had the same opportunities as the richest in our society . . It's time to stop seeing health as a matter of lifestyle choice and start campaigning for justice--for all our sakes." —The Observer

“Marmot's important study shows that--in every culture--our happiness and health are closely related to the place we occupy in the status hierarchy, and that that the key to status is our occupation.” —The Guardian on STATUS SYNDROME

“Bubbling with findings, discreetly illuminated by the light of social justice, written considerately for ordinary readers . . . Packed with ideas that should have been coursing through public debate for years.” —The Independent on STATUS SYNDROME

“If you want to understand why the health of people living in the United States, the richest and most powerful country in world history, lags far behind the health of people in other rich nations, then be prepared to wet your whistle here.” —The New England Journal of Medicine on THE STATUS SYNDROME