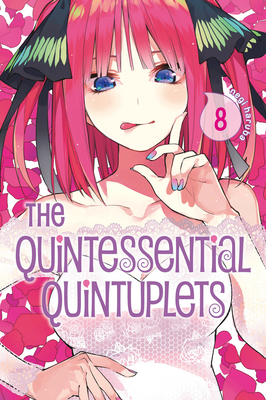 This is book number 8 in the The Quintessential Quintuplets series.

A high school romantic comedy with five times the cute girls! A high school boy must work part-time to help five sisters study so they can graduate, but the only thing these quintuplets have in common is that they all hate studying!

Having laid everything on the line with Futaro, Nino is left to wait for a response to her confession of love. Meanwhile, a surprise trip for both the Uesugis and the Nakanos to a local inn has Futaro facing tests even he can't prepare for--trying to figure out mysterious new characters, conflicts between the quints, and a new spin on the Quintuplets Game. As relationships new and old reveal themselves, the quints' increasingly overbearing father looms over all, and Futaro must come to terms with his own concerns about losing his job and relationship with the quints.

Negi Haruba debuted in 2013 with the story "Coward's Crossword" in Kodansha's Magazine Special. Haruba's first series was Purgatory Karma in 2014, followed in 2017 by Quintessetial Quintuplets, which is the artist's first manga to be published in English.