Dead Center: How Political Polarization Divided America and What We Can Do about It (Paperback) 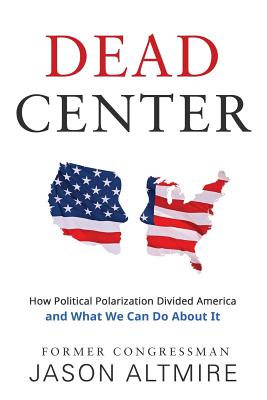 Rarely has America been so bitterly divided. Partisans now view those with differing opinions as the enemy. Cable news programs inflame passions rather than inform viewers. Social media provides the most irrational partisans a venue to spew their hatred and bias. Town hall meetings, once the staple of representative democracy, have degenerated into choreographed shouting matches. Money flows into campaigns at unprecedented rates. Centrists are nearly extinct in Congress, where compromise has become a dirty word. All the while, ordinary Americans feel disenfranchised, watching in disgust as our political process has been hijacked by ideological extremists.

A former three-term member of Congress, Jason Altmire is uniquely qualified to offer solutions to the polarization that has paralyzed Washington. A respected political moderate known for working with both sides of the aisle, Altmire during his time in office was recognized as having the most centrist voting record in the entire House of Representatives.

Fast-paced and easily-readable, Dead Center moves beyond the tired rhetoric that so often dominates our political discourse. Featuring a cast of characters including Donald Trump, Barack Obama, Hillary and Bill Clinton, Mike Pence and Nancy Pelosi, Dead Center contains riveting anecdotes from Altmire's time in office, giving readers an inside view of what it is like to be a centrist in a divided Congress. Altmire draws upon his first-hand experience in the corridors of power to evaluate the root causes of polarization and offer novel solutions to break the gridlock and restore to Washington a spirit of cooperation nonexistent today.