On the Abolition of All Political Parties (NYRB Classics) (Paperback) 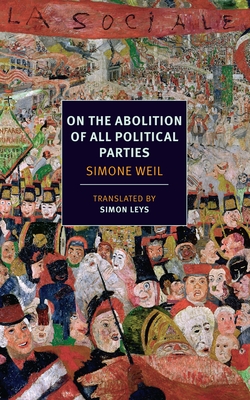 Simone Weil—philosopher, activist, mystic—is one of the most uncompromising of modern spiritual masters. In “On the Abolition of All Political Parties” she challenges the foundation of the modern liberal political order, making an argument that has particular resonance today, when the apathy and anger of the people and the self-serving partisanship of the political class present a threat to democracies all over the world. Dissecting the dynamic of power and propaganda caused by party spirit, the increasing disregard for truth in favor of opinion, and the consequent corruption of education, journalism, and art, Weil forcefully makes the case that a true politics can only begin where party spirit ends.

This volume also includes an admiring portrait of Weil by the great poet Czeslaw Milosz and an essay about Weil’s friendship with Albert Camus by the translator Simon Leys.

Simone Weil (1909–1943) was one of the first female graduates of the École Normale Supérieure. A Socialist, she volunteered to fight against the Fascists in the Spanish Civil War. In 1938, a mystical vision led her to convert to Roman Catholicism, though she refused the sacrament of baptism. She fled to the United States in 1942, where, in solidarity with the people of occupied France, she drastically limited her intake of food, so hastening her early death from tuberculosis. War and the Iliad by Weil and Rachel Despaloff, and translated by Mary McCarthy, is published by NYRB Classics.

Simon Leys’s (1935–2014) writing has appeared in The New York Review of Books, Le Monde, Le Figaro Littéraire, and other periodicals. Among his books are Chinese Shadows, The Death of Napoleon (forthcoming from NYRB Classics), Other People’s Thoughts, and The Wreck of the Batavia & Prosper. In 2013, New York Review Books Classics published The Hall of Uselessness, a volume of his collected essays.

Czeslaw Milosz (1911–2004) was born in Lithuania. Among his published books are works of criticism (The Captive Mind), fiction (The Issa Valley), memoir (Native Realm), and many volumes of poetry. In 1980 he was awarded the Nobel Prize in Literature.

“At a time when the distrust and disenchantment Americans feel with politics runs deeper than the Mariana Trench, Weil’s essay ‘On the Abolition of All Political Parties’ would no doubt be a best seller.”
—Robert Zaretsky, The New York Times

“What makes [Weil’s] thought so special, so bracing and so strange, is its combination of philosophical rigour and spiritual compass.”
—The Australian

“Weil’s writing is both quite strictly rational and eccentrically spiritual. Her words all but radiate moral and intellectual conviction.”
—Australian Book Review

"It makes for fascinating, and unsettling, election-year reading.”
—New Republic