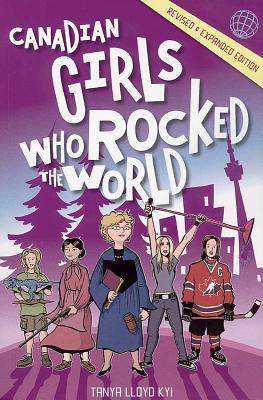 Take an adventure with some of Canada's most interesting and accomplished young women.

An inspiring book, Canadian Girls Who Rocked the World tells the stories of Canadian girls who won Olympic medals, discovered dinosaurs, explored their country or shaped its history -- all while still in their teens. For example, when she was just 16 years old, Marilyn Bell stepped into the icy waters of Lake Ontario and became the first person in history to swim across it. Subsequently, she became the youngest person to swim the English Channel and changed the world's ideas about women's athletic abilities and endurance. And pop star Avril Lavigne released her first album when she was 17, which skyrocketed to the top of the charts, selling 12 million copies.

This revised and expanded edition is packed with yet more tales of adventure and achievement. New profiles include hockey player Cassie Campbell, music exec Denise Donlon and environmental activist and leader of the federal Green Party Elizabeth May.

Every day, Canadian girls find new ways to rock the world. This fun book profiles women who have achieved greatness and contains quotes from the girls who aspire to follow in their footsteps.

Tanya Lloyd Kyi is the author of Canadian Boys Who Rocked the World, The Blue Jean Book and Canada: A Visual Journey.