The Blue Age: How the US Navy Created Global Prosperity--And Why We're in Danger of Losing It (Hardcover) 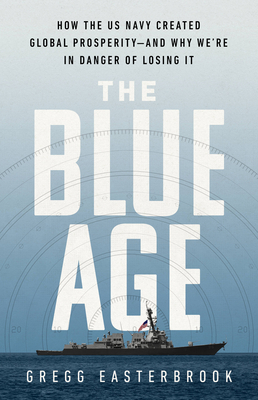 The US Navy brought half a century of peace and free trade to the world’s waterways. But climate change and rising nationalism threaten to end this blue age.

For decades, the Navy has stood sentinel over crucial waterways, ensuring safe passage of goods from nearly all nations. The result is the longest phase of peace on the waters since the Phoenicians, with rising living standards, more (total) jobs, and the dramatic decline of poverty in Asia.

But these prosperous times could be at an end. Today China is building warships at an extraordinary pace. India, Japan, Vietnam, and Europe are responding with more fighting ships. What will result from China’s rising naval might, particularly in the South China Sea? As ocean resources are shaped by climate change and new discoveries, will the world share them or fight over them? What will happen if America turns against free trade? Without American investment, the world could see a rise of supply shortages and seagoing conflict that would dwarf the impact of the container ship stuck in the Suez Canal.

Surveying naval history, economics, environmental threats, and great-power politics, The Blue Age makes an urgent argument about our oceans’ vital importance to the peace and prosperity of our global community.

Gregg Easterbrook is the author of twelve books, most recently It’s Better Than It Looks: Reasons for Optimism in an Age of Fear (2018). He was a staff writer, national correspondent, or contributing editor at The Atlantic for nearly forty years. Easterbrook has written for The New Yorker, Science, Wired, Harvard Business Review, the Washington Monthly, the New Republic, the New York Times, the Wall Street Journal, and the Los Angeles Times. He was a fellow in economics and in government studies at the Brookings Institution. In 2017 he was elected to the American Academy of Arts and Sciences.

“The Blue Age is brilliantly written, extremely well sourced, and remarkably accurate in its depiction of the centrality of the oceans to the well-being of our world.  Set sail with the author and you will arrive at the port of enlightenment, with a deeper understanding of the sea —whether you are an experienced mariner or have always simply wondered why the oceans matter.”—Admiral (ret.) James Stavridis

“READ THIS BOOK! The Blue Age is a compelling account of how our unprecedented 75 years of pax oceanum came about, how fragile it might be, and what exactly is at stake."—Marcia McNutt, president, National Academy of Sciences

“Gregg Easterbrook is a genius at taking huge, complex, seemingly remote but deeply vital subjects, and making them into compelling, informative reading. With a vivid sense of history, clear thinking about the future, and a nice touch of irony and humor, he explains why our destiny lies on the waves of the blue oceans.”—Evan Thomas, author of Sea of Thunder and John Paul Jones

“Gregg Easterbrook’s engaging new book is at once a reminder and a warning. He brilliantly reacquaints us with the vital role of sea power and focuses the mind on how the destinies of nations often turn on who controls the oceans and waterways of an ever-shrinking world.”—Jon Meacham, author of The Soul of America

“A captivating geopolitical case for the power of the sea and the key role of the U.S. Navy -- as a preface to the author's controversial prescriptions for maritime power sharing and innovation.”—David Malpass, President, World Bank

“In this thought-provoking book, Gregg Easterbrook puts the oceans firmly in the center of a vitally important story about the past, present, and future.”—Helen Rozwadowski, University of Connecticut - Avery Point

“[A] useful primer for Americans who have only a foggy understanding of why the U.S. invests in naval power… Mr. Easterbrook makes a strong case that the tenuous peace on the seas is worth trillions of dollars to the world economy and is essential to global order.”—The Wall Street Journal

“[M]ake[s a] strong case… that U.S. security and prosperity depend on naval dominance…will offer most readers helpful insights into maritime aspects of the global economy, the rise of China, and climate change.”—Foreign Affairs