City of Light: The Making of Modern Paris (Hardcover) 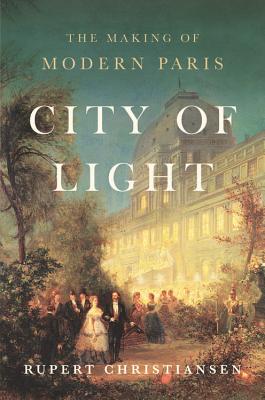 By Rupert Christiansen
$25.00
Usually arrives at our store in 2-8 business days.

A sparkling account of the nineteenth-century reinvention of Paris as the most beautiful, exciting city in the world

In 1853, French emperor Louis Napoleon inaugurated a vast and ambitious program of public works in Paris, directed by Georges-EugÃ¿ Haussmann, the prefect of the Seine. Haussmann transformed the old medieval city of squalid slums and disease-ridden alleyways into a "City of Light" characterized by wide boulevards, apartment blocks, parks, squares and public monuments, new rail stations and department stores, and a new system of public sanitation. City of Light charts this fifteen-year project of urban renewal which -- despite the interruptions of war, revolution, corruption, and bankruptcy -- set a template for nineteenth and early twentieth-century urban planning and created the enduring landscape of modern Paris now so famous around the globe.

Lively and engaging, City of Light is a book for anyone who wants to know how Paris became Paris.

Rupert Christiansen has been writing about the arts for the Daily Telegraph since 1996. His many books include Prima Donna, Paris Babylon, and Romantic Affinities, which received the Somerset Maugham Award. A fellow of the Royal Society of Literature since 1997, he teaches at Keble College, Oxford and lives in London.

"The demolition and rebuilding of Paris during the Second Empire was, then as now, a subject of impassioned disagreement.... [An] astute, gossipy history."
—New Yorker

"Witty, learned and informative...This little book will make you want to walk the expansive elegance of Paris, as well as its back streets, from one end to the other, seeking of French history in the sites it brings so vividly to life."
—New York Times Book Review

"If you are heading for Paris...be sure to put City of Light in your bag...Rupert Christiansen's account of the destruction and rebuilding [of Paris] is masterly-vivid, dramatic...and ultimately tragic."—Sunday Times (UK)

"Good reading for all lovers of the City of Light."
—Booklist (starred review)

"A concise yet admirably thorough account of the reinvention of one of the world's great cities...Engrossing."
—Kirkus

"Christiansen writes about the streets he clearly loves with wit and élan...Christiansen's splendidly illustrated book made this homesick expat look at Paris with new eyes."
—Times

"If you are heading for Paris...be sure to put City of Light in your bag...Rupert Christiansen's account of the destruction and rebuilding [of Paris] is masterly-vivid, dramatic...and ultimately tragic."
—Sunday Times

"Detailed.... Christiansen...looks back over this time of major upheaval whose results can still be seen today."
—France-Amérique

"In City of Light, Rupert Christiansen illuminates the tumultuous years of the Second Empire (1852-70) of Napoleon III who, in league with Parisian overlord, Baron Georges Haussmann, rewrote the script for what a modern city should be. Written deftly and with an unfailing eye for colorful detail, City of Light offers an insightful and heartfelt appreciation of the nineteenth-century origins of a world city."—Colin Jones, author of Paris: Biography of a City