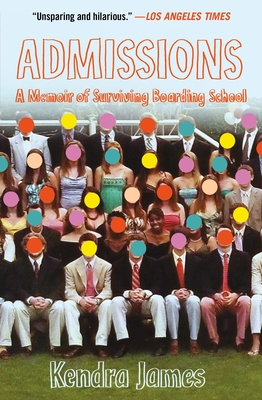 NAMED A BEST NONFICTION BOOK OF 2022 BY ESQUIRE

“[C]harming and surprising. . . The work of Admissions is laying down, with wit and care, the burden James assumed at 15, that she — or any Black student, or all Black students — would manage the failures of a racially illiterate community. . . The best depiction of elite whiteness I’ve read.”—New York Times

Early on in Kendra James’ professional life, she began to feel like she was selling a lie. As an admissions officer specializing in diversity recruitment for independent prep schools, she persuaded students and families to embark on the same perilous journey she herself had made—to attend cutthroat and largely white schools similar to The Taft School, where she had been the first African-American legacy student only a few years earlier. Her new job forced her to reflect on her own elite education experience, and to realize how disillusioned she had become with America’s inequitable system.

In ADMISSIONS, Kendra looks back at the three years she spent at Taft, chronicling clashes with her lily-white roommate, how she had to unlearn the respectability politics she'd been raised with, and the fall-out from a horrifying article in the student newspaper that accused Black and Latinx students of being responsible for segregation of campus. Through these stories, some troubling, others hilarious, she deconstructs the lies and half-truths she herself would later tell as an admissions professional, in addition to the myths about boarding schools perpetuated by popular culture.

With its combination of incisive social critique and uproarious depictions of elite nonsense, ADMISSIONS will resonate with anyone who has ever been The Only One in a room, dealt with racial microaggressions, or even just suffered from an extreme case of homesickness.

Kendra James was a founding editor at Shondaland.com where she wrote and edited work for two years. She has been heard and seen on NPR and podcasts including "Thirst Aid Kit," "Three Swings,” “Star Trek: The Pod Directive,” “The Canon," and "Al Jazeera." Her writing has been published widely from Elle, Marie Claire, Women's Health Magazine, Lenny, The Verge, Harpers, Catapult, and The Toast, among others.

“[C]harming and surprising. . . The work of Admissions is laying down, with wit and care, the burden James assumed at 15, that she — or any Black student, or all Black students — would manage the failures of a racially illiterate community. . . The best depiction of elite whiteness I’ve read, nailing the belonging derived from institutional affiliation, which is therefore impersonal and false, but manifests value in spite of this. James writes to illuminate her experience as a Black student at Taft. She throws just as much light on the school’s whiteness.”—New York Times

"With humor, insight, and a near-superhuman depth of grace, James straddles an ever-shifting line as the school’s first Black American legacy. . . The isolation that James captures, the uneasy and unspoken cease-fire she negotiates with whiteness at Taft, becomes an echo of the experiences of so many other students of color at the same schools that make up the world of the American elite. She takes up our repressed feelings and gives voice to the untold tales of neglect and disregard, of camaraderie and solidarity and survival, of those of us who were brought into spaces without anyone considering how we would fit."—The Cut

“Thorough, necessary, and overdue. . . [Admissions] boldly nam[es] the confusion, fear, and trauma that can so often come with being the only person who looks like you in any given room.”—Vogue.com

“Frank and devastating in its candor, as well as incisive in its critique of elite academia, Admissions is a poignant coming-of-age memoir.”—Esquire.com

"James's memoir is a thoughtful story about coming-of-age and finding your place in the world; she's a funny, observant writer with a powerful, unforgettable story to tell."—Town & Country

"What an extraordinary, razor-sharp book! Kendra James offers a gimlet-eyed insider’s view of being an outsider, painting the complicated world of elite schooling with such vividness and dark humor. This is a crucial account for our moment—asking and answering the question of how power is held, shifted, and grasped after by even the youngest in our society. I raced through the pages of Admissions, hungry for James’s voice and brilliant insights. The schooling she writes about may have been exclusive, but this book will electrify every reader."—R. Eric Thomas, bestselling author Here For It

“Through frequent pop culture allusions and a dry sense of humor, Kendra James reveals a world largely unexamined—the life of an American Black girl at a prestigious boarding school. Readers will shake their heads at young Kendra’s nerdy naïveté and frown at her classmates’ bigotry and bullying. As Kendra discovers the fallout of her own parents’ respectability politics and intraracial biases, she also learns more about her own identity and how she wants to navigate her life. Kendra James’ honest reflections as she looks back on what it means to be Not Like the Others will leave readers thinking about their own experiences with privilege and marginalization. Admissions is a captivating memoir, highlighting the complicated notions of upward mobility, belonging, entitlement, and community. Kendra has written a true eye-opener.”—Nichole Perkins, author of Sometimes I Trip on How Happy We Could Be

"In Admissions, [James] deconstructs the chokehold that whiteness and wealth have on private education. You’ll laugh almost as much as you cringe."—Glamour

"With wit and insight, Admissions explores the kind of upper-class education that most Americans have seen only in movies. James analyzes the racist attitudes she had to deal with, tells funny stories of her nerdy ways and fondly recalls the days of AIM chats. People of color who survived mostly white schools are sure to sympathize with James's experiences, but anyone will enjoy her perceptive storytelling."—Shelf Awareness

"Admissions is a memoir of the highest caliber."—Bitch Media

"James has crafted a book that is part Bildungsroman, part social indictment and part scorching criticism of elite boarding schools. She meticulously skewers the behavior of her white classmates as alternately clueless and cruel and vividly conveys the captious claustrophobia that thrives in such institutions."—Waterbury Republican American

“Admissions is an open and honest social critique of race in the US, as well as the coming-of-age story of a Black girl who is getting an education in a predominantly white boarding school.”—Book Reporter