Rising Water: The Story of the Thai Cave Rescue (Paperback) 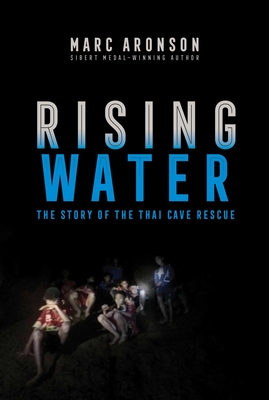 The incredible true story of the twelve boys trapped with their coach in a flooded cave in Thailand and their inspiring rescue.

On June 23rd, 2018, twelve members of the Wild Boars soccer team and their coach were exploring the Tham Luang Nang Non cave complex in northern Thailand when disaster struck. A rainy season downpour flooded the tunnels, trapping them as they took shelter on a shelf of the dark cave. Eight days of searching yielded no signs of life, but on July 2nd they were discovered by two British divers. The boys and their coach were eventually rescued in an international operation that took three days. What could have been a terrible tragedy became an amazing story of survival.

Award-winning author Marc Aronson brings us the backstory behind how this astounding rescue took place. Rising Water highlights the creative thinking and technology that made a successful mission possible by examining the physical, environmental, and psychological factors surrounding the rescue. From the brave Thai Navy SEAL who lost his life while placing oxygen tanks along the passageways of the cave, to the British divers that ultimately swam the boys to safety, to the bravery of the boys and their coach, this is the breathtaking rescue that captivated the entire world.

Marc Aronson is the acclaimed author of Trapped: How the World Rescued 33 Miners from 2,000 Feet Below the Chilean Desert, which earned four starred reviews. He is also the author of Rising Water: The Story of the Thai Cave Rescue and Sir Walter Ralegh and the Quest for El Dorado, winner of the ALA’s first Robert F. Sibert Award for nonfiction and the Boston Globe-Horn Book Award. He has won the LMP award for editing and has a PhD in American history from New York University. Marc is a member of the full-time faculty in the graduate program of the Rutgers School of Communication and Information. He lives in Maplewood, New Jersey, with his wife, Marina Budhos, and sons. You can visit him online at MarcAronson.com.

* “Despite the concise narration, the gravity of the rescue is never dampened. Aronson is mindful in his descriptions of differences in cultures and takes care not to filter them through Western assumptions. He also includes a chapter openly describing gaps in his research and account due to key players' personal or political biases. . . . Solid writing preserves the natural rising suspense and astonishing details of this rescue.”
— Kirkus Reviews, Starred Review

“Told in a breakneck chronological sequence, those familiar with the outcome of the story are still left breathless by the pace of the storytelling. . . . With respect paid to all countries that sent individuals to help problem-solve for the crisis, this will be a useful text in the classroom and a heart-pounding narrative nonfiction title for individual readers. Highly recommended.”
— School Library Connection

“Aronson makes the event feel new through his deeply detailed research and his ability to share pertinent information that news organizations may have ignored. . . . A thorough, engaging, and inspiring book.”
— School Library Journal

“Aronson takes readers beyond the headlines and into the action of this harrowing event. . . . The text quickly gains momentum as Aronson recounts some of the suspenseful life-or-death moments as divers brought each boy out one by one.”
— Booklist

“Aronson makes each nail-biting day feel immediate. . . . There’s more going on here than heroic rescue, though; there’s also serious attention paid to the “stateless” status of some of the boys, to Thai attitudes toward government, religion, and privacy that influenced subsequent media coverage, to comparison of the international response to the boys’ rescue and of the deadly, nearly concurrent failure of a Laotian dam not far away.”
— BCCB