What Black and White America Must Do Now: A Prescription to Move Beyond Race (Hardcover) 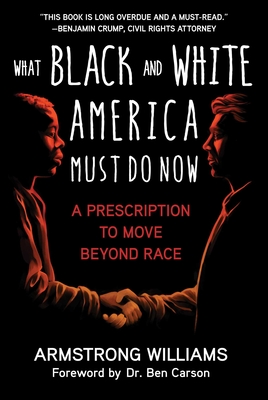 A call to our highest virtues and ideals

What Black and White People Must Do Now explores the complexity of race and culture in the United States. In his third book, renowned conservative entrepreneur, author, and philanthropist Armstrong Williams discusses his prescription for healing and atonement amidst today’s current social upheaval.

Race and racism are America's original sin, and four hundred years later, they still plague the nation, pitting groups against each other. Despite how much time has elapsed, many Americans remain befuddled by how to move forward; however, the time for solutions has come.

In this book, Armstrong Williams recounts his personal story and journey growing up working on his family farm in rural South Carolina, leading to an unexpected meeting with the late Senator Strom Thurmond of South Carolina, which turned into an unlikely relationship that led him to the halls of power in Washington, D.C.

Williams calls for all Americans to stand up to represent America’s highest virtues and ideals, and he challenges us to look beyond the pale of race for something much deeper.

Armstrong Williams is an entrepreneur, philanthropist, and author of two earlier books. Called “one of the most recognized conservative voices in America” by the Washington Post, he is a pugnacious, provocative, and principled voice for conservative and Christian values in America's public debate.

Williams is the founder and host of a weekly nationally syndicated television show, The Armstrong Williams Show, which airs on Sinclair Broadcast Group network affiliates across the United States. The program features human interest and political topics, including interviews with leading lights and experts from across the political spectrum. He is the founder and CEO of Howard Stirk Holdings, a holding company that owns broadcast television stations around the United States, designating Williams as the second largest minority broadcast television owner in the United States.

Benjamin S. Carson, Sr., MD, became the chief of pediatric neurosurgery at Johns Hopkins Hospital in 1984 at the age of 33, making him the youngest major division director in the hospital's history. He has written and published nine books, four of which were co-authored with Candy, his wife of 40 years. Dr. Carson was the recipient of the 2006 Spingarn Medal. In June 2008, he was awarded the Presidential Medal of Freedom.

“Finally, a trusted voice on what needs to happen in America in order to heal our divides. Armstrong’s extraordinary success as an entrepreneur, coupled with the respect he has in all communities gives him an insight that very few have. This book is long overdue and a must-read.”
—Benjamin Crump, Esq., renowned civil rights attorney

“Today we find ourselves dangerously in a place of uncertainty that beckons leaders to rise up and speak up for the values and integrity that this country was built on. Yet, we must evolve, and we must do it quickly and with poise and fortitude. In this book is the poise and fortitude that sees the truth from both sides of the equation; the truth that others are afraid to speak, you will find here.”
—Ambassador C. Boyden Gray, former White House counsel to former President George. H.W. Bush and former ambassador to the European Union

“Armstrong takes on the toughest topics currently facing the United States and he does so in an honest and straightforward way. He doesn’t shy away from being blunt and honest about what we all need to do to continue crafting a more perfect union. If you’re looking for the unabashed truth, this book is for you.”
—David Smith, chairman of Sinclair Broadcast Group

"It's refreshing to read a book that, while I may not always agree with the conclusions, it’s certainly not motivated by politics and has a spiritual manifesto for all mankind. It is surprisingly very constructive and honest in what we all can do to heal the racial and economic divide in America."
—Beverly Perry, senior advisor to Washington, DC Mayor Muriel Bowser.