Masters of the Universe: Revelation (Paperback) 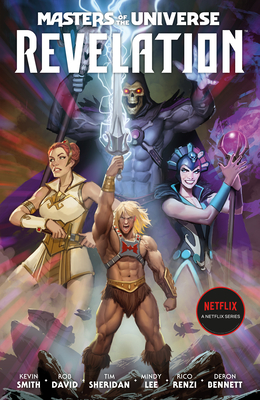 
Following a vicious Orlax attack on his father King Randor, He-Man learns the creature is linked to the origin of the sword of power. To save Randor and put an end to the chaos He-Man embarks on an epic journey that pits him against his longtime foes Skeletor and Evil-Lyn, and sees Teela take the reins of a powerful legacy.

This graphic novel collects the four issue series Masters of the Universe: Revelations and features covers by Stjepan Sejic and pinups from Mike Mignola, Walt Simonson, Bill Sienkiewicz, and more!

Collects Masters of the Universe: Revelation #1–#4.

Kevin Smith is an American filmmaker, actor, comedian, public speaker, comic book writer, author, and podcaster. He came to prominence with the low-budget comedy Clerks (1994), which he wrote, directed, co-produced, and acted in as the character Silent Bob of stoner duo "Jay & Silent Bob". Jay and Silent Bob have appeared in Smith's follow-up films Mallrats, Chasing Amy, Dogma, and Jay and Silent Bob Strike Back which were mostly all set in his home state of New Jersey. While not strictly sequential, the films frequently featured crossover plot elements, character references, and a shared canon described by fans as the "View Askewniverse", named after his production company View Askew Productions, which he co-founded with Scott Mosier.

Smith also directed and produced films such as the buddy cop action comedy Cop Out (2010), the horror film Red State (2011), and the horror comedy Tusk (2014), the first film in the True North trilogy.

Smith is the owner of Jay and Silent Bob's Secret Stash, a comic book store in Red Bank, New Jersey that is the subject of the reality-television show Comic Book Men. He also hosts the movie-review television show Spoilers. As a podcaster, Smith co-hosts several shows on his own SModcast.com, including SModcast, Fatman on Batman, and the live show Hollywood Babble-On. Smith is well known for participating in long, humorous Q&A sessions that are often filmed for DVD release, beginning with An Evening with Kevin Smith.