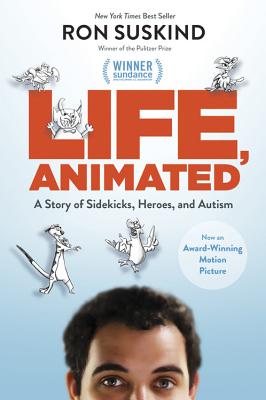 Pulitzer Prize-winning author Ron Suskind tells the story of how his autistic son was able to regain the ability to speak through the medium of Disney animated films.

"Ron Suskind's "Life, Animated" is an extraordinary saga of an exceptional boy from a remarkable family and their compelling journey through autism."-David Royko, Chicago Tribune

Imagine being trapped inside a Disney movie and having to learn about life mostly from animated characters dancing across a screen of color. A fantasy? A nightmare? This is the real-life story of Owen Suskind, the son of the Pulitzer Prize-winning journalist Ron Suskind and his wife, Cornelia.
An autistic boy who couldn't speak for years, Owen memorized dozens of Disney movies, turned them into a language to express love and loss, kinship, brotherhood.The family was forced to become animated characters, communicating with him in Disney dialogue and song; until they all emerge, together, revealing how, in darkness, we all literally need stories to survive.

RonSuskind isthe author of four New York Times bestsellers and the critically acclaimed, A Hope in the Unseen: An American Odyssey from the Inner City tothe Ivy League. His other books include, Confidence Men, The Way of the World,The One Percent Doctrine and The Price of Loyalty. He was the senior national affairs writer for The Wall Street Journal,where he won the Pulitzer Prize, and is currently the Senior Fellow atHarvard's Center for Ethics. He lives in Cambridge, Mass., with his wife, Cornelia Kennedy.

"Mr. Suskind displays virtuosity in capturing the intimate realities of life in a household dominated by autism, where the disorder shapes the life of every family member."
—Judith Warner, The New York Times

"Life, Animated is the author's amazing memoir of his family's 20-year, struggle to connect with their autistic son. This is the book that readers who have no one in their lives affected by autism and who would otherwise never it pick up should definitely read. Eyes will tear. Hearts will cheer. In these pages, Owen is every reader's son."
—Don Oldenburg, USA Today

"Ron Suskind's "Life, Animated" is an extraordinary saga of an exceptional boy from a remarkable family and their compelling journey through autism."
—David Royko, Chicago Tribune

The book by Pulitzer Prize-winning journalist Ron Suskind is a fierce love story. It is also one of those fascinating medical stories that show doctors have no monopoly on knowledge.
—Mark Johnson, Milwaukee Journal Sentinel

Reading Suskind's factual yet moving account of the devotion, love and energy put into helping Owen will leave readers wondering if they could do the same. This is a wonderful book, whether or not you know a person with autism.
—Amanda St. Amand, St. Louis Post Dispatch