An Everlasting Meal: Cooking with Economy and Grace (Paperback) 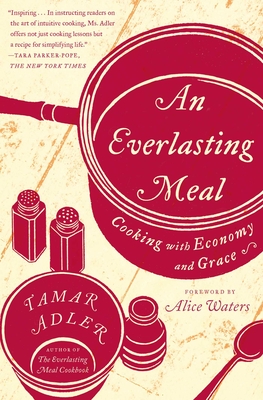 In An Everlasting Meal, Tamar Adler has written a book that “reads less like a cookbook than like a recipe for a delicious life” (New York magazine).

In this meditation on cooking and eating, Tamar Adler weaves philosophy and instruction into approachable lessons on feeding ourselves well. An Everlasting Meal demonstrates the implicit frugality in cooking. In essays on forgotten skills such as boiling, suggestions for what to do when cooking seems like a chore, and strategies for preparing, storing, and transforming ingredients for a week’s worth of satisfying, delicious meals, Tamar reminds us of the practical pleasures of eating. She explains what cooks in the world’s great kitchens know: that the best meals rely on the ends of the meals that came before them. With that in mind, she shows how we often throw away the bones, skins, and peels we need to make our food both more affordable and better. She also reminds readers that almost all kitchen mistakes can be remedied. Summoning respectable meals from the humblest ingredients, Tamar breathes life into the belief that we can start cooking from wherever we are, with whatever we have.

An empowering, indispensable work, An Everlasting Meal is an elegant testimony to the value of cooking.

Tamar Adler is a contributing editor to Vogue. Her writing has appeared in The New York Times Magazine, The New York Times Book Review, the NewYorker.com, and other publications. Adler has won a James Beard Award and an IACP Award, and is the author of An Everlasting Meal and Something Old, Something New. She lives in Hudson, New York.

Alice Waters is the visionary chef and owner of Chez Panisse in Berkeley, California. She is the author of four cookbooks, including Chez Panisse Vegetables and Fanny at Chez Panisse. Known as the Queen of Local Food, she founded the Edible schoolyard at Berkeley’s Martin Luther King Jr. Middle School. She lives in San Francisco.

“An Everlasting Meal is beautifully intimate, approaching cooking as a narrative that begins not with a list of ingredients or a tutorial on cutting an onion, but with a way of thinking…. Tamar is one of the great writers I know—her prose is exquisitely crafted, beautiful and clear-eyed and open, in the thoughtful spirit of M.F.K. Fisher. This is a book to sink into and read deeply.” —Alice Waters, from the Foreword

"It can be tricky, in this age of ethically charged supermarket choices, to remember that eating is an act of celebration. Tamar Adler's terrific book wisely presents itself as a series of how to’s—How To Boil Water, How to Have Balance, How to Live Well—with the suggestion that it's not only possible to do all these things, but in fact a pleasure. An Everlasting Meal provides the very best kind of lesson (reminding us we enjoy being taught), that there is real joy to be had in eating, and eating well." --Dan Barber, Chef/Co-Owner of Blue Hill and Blue Hill at Stone Barns

“Tamar Adler understands a simple truth that seems to evade a lot of cookbook writers and self-proclaimed ‘foodies’: cooking well isn't about special equipment or exotic condiments or over-tested recipes (and it sure isn't about ‘quickfire challenges’ or kicking it up a notch). It's about learning some basics, respecting the ingredients, and developing a little culinary intuition, or maybe just plain common sense. A book can’t necessarily teach you how to do that, but An Everlasting Meal will almost certainly inspire you to teach yourself.” --Colman Andrews, author of The Country Cooking of Italy and Editorial Director of TheDailyMeal.com

“In this beautiful book, Tamar Adler explores the difference between frugal and resourceful cooking. Few people can turn the act of boiling water into poetry. Adler does. By the time you savor the last page, your kitchen will have transformed into a playground, a boudoir and a wide open field. An Everlasting Meal deserves to be an instant and everlasting culinary classic.” –Raj Patel, author of The Value of Nothing and Stuffed and Starved

"An Everlasting Meal is a great thrill to read. Anyone who cooks is engaged in a re-creation of the Enlightenment Age--beginning with alchemy and mystery, always grasping towards chemistry and a tasty supper. With this book, Tamar Adler has chronicled our epic. Her tone manages to make the reader almost feel like he is thinking out loud. A marvelous accomplishment." –Jack Hitt, contributing writer to the New York Times Magazine

“Lessons so right and so eloquent that I think of them as homilies." --Corby Kummer, The New York Times Book Review

"Reading [An Everlasting Meal] is like having a cooking teacher whispering suggestions in your ear.... Mindfulness, I’m discovering through this terrific book, can be delicious."
--Novella Carpenter, author of Farm City

“Tamar Adler has written the best book on ‘cooking with economy and grace’ that I have read since MFK Fisher.”
--Michael Pollan

"What it really is is a book about how to live a good life: take the long view, give to others, learn from everything you do, and always, always, always mindfully enjoy what you are doing and what you’ve done. The fact you’ll learn to be a great cook is just a bonus." --Forbes.com

"Adler proves herself an adept essayist in this discourse on instinctive home cooking. Though highly personal, it’s much less a food memoir than a kind of cooking tao." --The Atlanta Journal-Constitution

"Simultaneously meditative and practical, about how to appreciate and use what you have and how to prepare it appropriately with a minimum of fuss, space, equipment, or waste." --The Austin Chronicle

The perfect synthesis of literature and self-help. I really think it’s a profound book.
— Sheila Heti