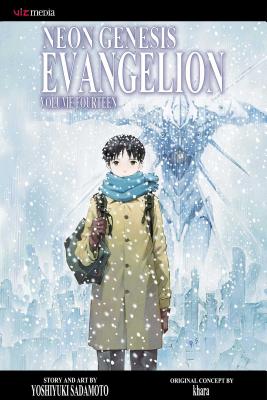 By Yoshiyuki Sadamoto
$10.99
Not currently available - email or call for details

This is book number 14 in the Neon Genesis Evangelion series.

Books based on the landmark animated series that redefined the mecha genre.

Japan's most controversial anime series is over...but not the manga version of Neon Genesis Evangelion! Series co-creator Yoshiyuki Sadamoto's personal interpretation of the Evangelion characters and story is sure to intrigue new and old fans alike. In 2015, the "Angels" have returned, and Shinji Ikari, a fourteen year-old child of the new Earth, is forced by his father Gendo--commander of the secret organization NERV--to pilot the monstrous biomechanical weapon called "Evangelion" to match the Angels' fearsome power...

The Third Impact has come. As the unbelievably massive form of Ayanami towers over the Earth, the Instrumentality Project enters its last stages. While the world shudders in terror as it is engulfed in a sea of LCL, Shinji’s consciousness merges with Lilith’s, and he searches his memories for a final understanding of himself and the fate of humanity.

Yoshiyuki Sadamoto, one of the founding members of the animation powerhouse Studio Gainax, is the character designer for THE WINGS OF HONNEAMISE, NADIA, NEON GENESIS EVANGELION the animated series, and many other anime, illustration and art projects. His latest art book, DER MOND, is also available in English translation from VIZ Media. NEON GENESIS EVANGELION is Sadamoto's only full-length manga series.