Batman: Creature of the Night (Hardcover) 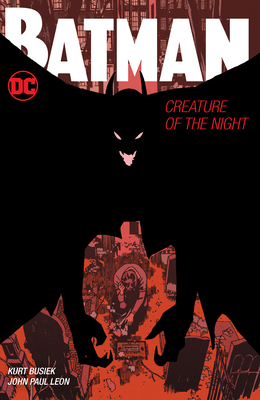 Bruce Wainwright, a comic book-reading kid obsessed with the Caped Crusader, loses his parents in a violent crime...and in the real world, no superheroes exist to save the day.

Batman: Creature of the Night, written by Kurt Busiek (Astro City) and drawn by John Paul Leon (Mother Panic) is a standalone story set outside of regular continuity in 1968 Boston, Massachusetts. The survivor of the brutal murder of his parents, young Bruce sees grief and rage build inside himself...until something strange starts taking wing in the Gotham night! Something similar to the comics he's been reading his whole life. As life begins to imitate art, will Bruce Wainwright be able to live up to his fictional namesake?

A deliberate spiritual companion to the beloved Superman: Secret Identity, Batman: Creature of the Night puts a new spin you've never seen before on the legend of Batman--and the dark emotions that drive him!

This volume collects issues #1-4 of the critically acclaimed miniseries.

Kurt Busiek was born in Boston, Massachusetts. He began writing comics professionally in 1982, selling stories to both DC and Marvel Comics in the same month, both of which appeared the same day. Since then, he's written series and characters ranging from Mickey Mouse to Vampirella, including Aquaman, Spider-Man, Conan, Iron Man, the Avengers and more. He is best known for the Marvels series and for his co-creation Astro City, both of which have garnered numerous industry awards. He lives in the Pacific Northwest with his wife, Ann, and his two daughters. He spends far too much time on the Internet.

“A spiritual sequel of sorts to Secret Identity…has all the makings of another great superhero story.” —IGN

“Destined to sit with the great Batman stories, this is a must-read…a beautiful story well told.” —Comicosity

“One of those rare instances of artistic synergy that transcends other Bat tales and resonates long after reading.” —Syfy