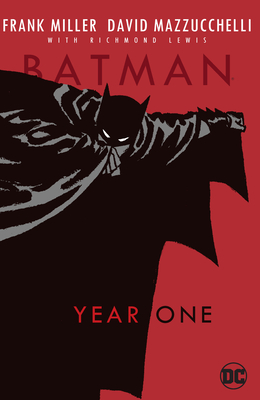 In 1986, Frank Miller and David Mazzucchelli produced this groundbreaking reinterpretation of the origin of Batman—who he is, and how he came to be. Sometimes careless and naive, this Dark Knight is far from the flawless vigilante he is today.

In his first year on the job, Batman feels his way around a Gotham City far darker than the one he left. His solemn vow to extinguish the town’s criminal element is only half the battle; along with Lieutenant James Gordon, the Dark Knight must also fight a police force more corrupt than the scum in the streets.

Batman: Year One stands next to Batman: The Dark Knight Returns on the mantle of greatest Batman graphic novels of all time. Timeless in its appeal, Frank Miller and David Mazzucchelli’s masterpiece would stand apart from the crowded comics field even today.

This edition includes the complete graphic novel, a new introduction by writer Frank Miller and a new illustrated afterword by artist David Mazzucchelli. Completing this collection are over 40 pages of never-before-seen developmental material such as character and layout sketches, sample script pages, sketches, and more that pro-vide a glimpse into the making of this contemporary classic.

Frank Miller began his career in comics in the late 1970s and rose to fame while first drawing, and then writing, Daredevil for Marvel Comics. He was also the creative force behind Batman: The Dark Knight Returns, Batman: Year One, and Batman: The Dark Knight Strikes Again.  His many works have not only redefined classic characters, but also, on a few occasions, revitalized the comics industry. His creator-owned Sin City hit the page in 1991, and then the silver screen in 2005 — with Miller on board as co-director. His multi-award-winning 300 graphic novel was brought to full-blooded life in the 2007 motion picture of the same name, and in 2008 he directed the feature film of Will Eisner’s The Spirit.

David Mazzucchelli drew his first professional comic book while majoring in painting at the Rhode Island School of Design. After a handful of jobs for Marvel and DC Comics, he became the regular artist on Marvel’s Daredevil, where he first collaborated with writer Frank Miller to produce the highly successful and critically acclaimed seven-part story “Born Again.” David’s most recent project is the self-published Rubber Blanket. His work on BATMAN and Daredevil has earned him both an American Comic Book Award and Spain’s Haxtur Prize.  In 2009, Pantheon Books published Mazzucchelli's Asterios Polyp, which was met with critical acclaim.  In 2010,
Asterios Polyp won three Eisner Awards for Best Graphic Album–New, Best Writer/Artist, Best Lettering.

"This is a story no true Batman fan should be able to resist." —School Library Journal

“A gritty and atmospheric retelling of Batman’s earliest days as told by the author of the seminal Dark Knight Returns (1987). Mazuzuccelli’s art brings a new level of emotional instensity and realistic, muscular action.” —Booklist

“Year One worked as a fine piece of urban crime fiction…it was just a bonus that the arc also brought new depth to iconic characters that had been around for nearly 50 years.” —A.V. Club

“[One of] the most influential Batman stories ever told.” —Vulture

“You know that saying, "If you read just one book, this is the one to read"? Well, that applies to Batman: Year One. It's not only one of the most important comics ever written, it's also among the best” —IGN

“The best thing that Miller has ever written about Batman is the Batman: Year One.”  —Wired.com

“This may be the best Batman comic ever.” —io9