Unsettled: How the Purdue Pharma Bankruptcy Failed the Victims of the American Overdose Crisis (Hardcover) 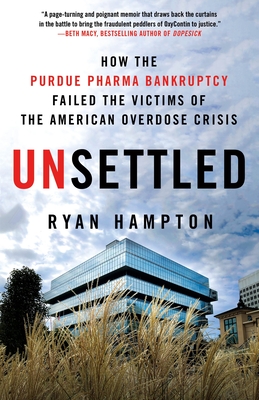 A shocking inside account of reckless capitalism and injustice in the Purdue Pharma bankruptcy case.

In September 2019, Purdue Pharma—the maker of OxyContin and a company controlled by the infamous billionaire Sackler family—filed for bankruptcy to protect itself from 2,600 lawsuits for its role in fueling the U.S. overdose crisis. Author and activist Ryan Hampton served as co-chair of the official creditors committee that acted as a watchdog during the process, one of only four victims appointed among representatives of big insurance companies, hospitals, and pharmacies. He entered the case believing that exposing the Sacklers and mobilizing against Purdue would be enough to right the scales of justice. But he soon learned that behind closed doors, justice had plenty of other competition—and it came with a hefty price tag.

Unsettled is the inside story of Purdue’s excruciating Chapter 11 bankruptcy proceedings, the company’s eventual restructuring, and the Sackler family’s evasion of any true accountability. It’s also the untold story of how a group of determined ordinary people tried to see justice done against the odds—and in the face of brutal opposition from powerful institutions and even government representatives.

Although America was envisioned as an equitable place, where the vulnerable are protected from the greed of the powerful, the corporate-bankruptcy process betrays those values. In its heart of hearts, this system is built to shield the ultra-wealthy, exploit loopholes for political power, promote gross wealth inequality, and allow companies such as Purdue Pharma to run amok.

The real story of the Purdue bankruptcy wasn’t that the billion-dollar corporation was a villain, a serial federal offender. No matter what the media said, Purdue didn’t do this alone. They were aided and abetted by the very systems and institutions that were supposed to protect Americans. Even on-your-side elected officials worked against Purdue’s victims—maintaining the status quo at all costs.

Americans deserve to know exactly who is responsible for failing to protect people over profits—and what a human life is worth to corporations, billionaires, and lawmakers. Unsettled is what happened behind closed doors—the story of a sick, broken system that destroyed millions of lives and let the Sacklers off almost scot-free.

RYAN HAMPTON is a national addiction recovery advocate, community organizer, author, and person in long-term recovery. He has worked with multiple nonprofits across the country and served in a staff capacity for various political campaigns. An alumnus of the Clinton White House, Hampton is in recovery from a decade of active opioid use and is a leading voice in America’s rising recovery movement. Hampton’s first book was American Fix. He lives in Nevada with his fiancé, Sean, and their dog, Dollar.

“A page-turning and poignant memoir that draws back the curtains in the fight to bring the fraudulent peddlers of OxyContin to justice.”
—Beth Macy, New York Times bestselling author of Dopesick

“A dramatic and unprecedented view of what really happened inside the multibillion-dollar bankruptcy of OxyContin-maker Purdue Pharma. With rare insider access to the proceedings, Hampton mercilessly exposes how the arcane world of bankruptcy law failed time and again to address the injuries and concerns of individual victims. Unsettled will stay with you long after the last page.”
—Gerald Posner, New York Times bestselling author of Pharma and God’s Bankers

“In this epic fight for justice on behalf of victims of the opioid crisis, Ryan Hampton exposes the corrupt and rigged bankruptcy system that allowed Purdue Pharma and the Sackler family to literally get away with murder. Hampton, who had a front-row seat at the proceedings, has guts and grit. He writes with a fire in the belly. Unsettled is a propulsive tale that calls out corporate greed, money-hungry lawyers, and complicit government bureaucrats amid a public health tragedy that continues to rage to this day. Hampton is not only a leader in the recovery community. He’s also an American hero.”
—Eric Eyre, Pulitzer Prize winner and author of Death in Mud Lick

“Unsettled is a fast-paced takedown of a flawed judicial system, told with unwavering honesty. Hampton provides exclusive and jaw-dropping insights into the lawyerly underworld of the Purdue Pharma bankruptcy, where executives and billionaires responsible for our nation’s opioid epidemic have found refuge from accountability. Readers will grieve, rage, and be moved to action by this unique and powerful book.”
—Charlotte Bismuth, former prosecutor and author of Bad Medicine

“An extraordinary book, both a legal thriller and an intimate memoir about the opioid crisis sweeping our nation and those at the very heart of it—Purdue Pharma and the Sackler family. Ryan’s fury burns through these pages, and yours will too once you read it.”
—Elizabeth Vargas, bestselling author of Between Breaths

“[Ryan Hampton] combines the sarcasm of an early Bill Bryson travelogue with the disbelief of Alice in Alice’s Adventures in Wonderland in this breezy but informative memoir of his falling down a rabbit hole of negotiation, mediation, and Zoom calls as he pushed for a fair shake for victims...A passionate, well-informed insider’s account of one of the most controversial bankruptcies in U.S. history.”
—Kirkus