Truth in Our Times: Inside the Fight for Press Freedom in the Age of Alternative Facts (Hardcover) 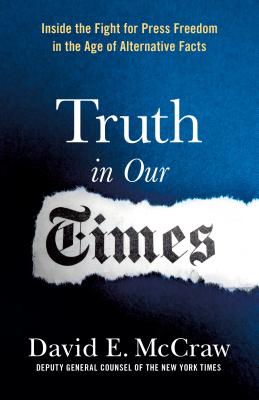 David E. McCraw recounts his experiences as the top newsroom lawyer for the New York Times during the most turbulent era for journalism in generations.

In October 2016, when Donald Trump's lawyer demanded that The New York Times retract an article focused on two women that accused Trump of touching them inappropriately, David McCraw's scathing letter of refusal went viral and he became a hero of press freedom everywhere. But as you'll see in Truth in Our Times, for the top newsroom lawyer at the paper of record, it was just another day at the office.

McCraw has worked at the Times since 2002, leading the paper's fight for freedom of information, defending it against libel suits, and providing legal counsel to the reporters breaking the biggest stories of the year. In short: if you've read a controversial story in the paper since the Bush administration, it went across his desk first. From Chelsea Manning's leaks to Trump's tax returns, McCraw is at the center of the paper's decisions about what news is fit to print.

In Truth in Our Times, McCraw recounts the hard legal decisions behind the most impactful stories of the last decade with candor and style. The book is simultaneously a rare peek behind the curtain of the celebrated organization, a love letter to freedom of the press, and a decisive rebuttal of Trump's fake news slur through a series of hard cases. It is an absolute must-have for any dedicated reader of The New York Times.

DAVID E. MCCRAW is Deputy General Counsel at The New York Times, where he has worked since 2002. He provides legal counsel to the newsroom regarding libel, freedom of information, court access, litigation and news-gathering. Previously, he was Deputy General Counsel of The New York Daily News. He conducts workshops and performs pro bono work for freedom of press and information around the world. He is an adjunct professor at the NYU School of Law and a visiting lecturer at Harvard Law School.

“In his fine new book, McCraw takes us behind the scenes of the venerable (or failing, depending on your perspective) New York Times. A self-professed ‘raving moderate,’ McCraw is in prime position to provide this backstage view as he draws equally on his experience as a writer and a lawyer. He excels at both, explaining legal issues in lay terms and unspooling the stories that propel the book.”
—Preet Bharara, New York Times Book Review

“David McCraw is far more than a lawyer. He’s an advocate, a sage, and a level-headed, witty partner who ensures that principled, hard-won journalism sees the light of day and is protected and defended after it’s published. David is also one of the world’s foremost proponents of the First Amendment and free expression—and our community is lucky to have him.”
—Timothy L. O’Brien, executive editor of Bloomberg Opinion and author of TrumpNation

“Everyone in the business knows that David McCraw is the best friend a reporter can have. Brilliant, steadfast and brave, he has made some of the best journalism done in my lifetime better, and, most importantly, possible. The audience, the authors and the owners he has guided owe him.”
—Lowell Bergman, Pulitzer Prize winner and Distinguished Chair in Investigative Reporting at the University of California

“David McCraw’s wise, witty and consequential tale brings us into the often-harrowing challenges that beset the Times in the era of Wikileaks, the #MeToo movement, and ‘fake news.’ McCraw’s unabashed love affair with the First Amendment shines a convincing light on the vital tie between our democracy and a free press—and on the ever-important role of its defenders.”
—Karen Greenberg, Director of the Center on National Security at Fordham Law School and author of Rogue Justice

“In Truth in Our Times, David McCraw, a wry Midwesterner with a gift for storytelling, deftly spells out the consequences for democracy when the very idea of journalism is under attack. He gives us a compulsively readable account of the pressures under which the Times operates from his front-row perspective as a trusted counselor to the paper's reporters and executives. Without ever making himself a hero, his account forces us to confront the need to reassert the value of a free press at a time of growing darkness. Required reading for every American who cares about the future of our country.”
—Susan Crawford, author of Captive Audience and Fiber

“There are few more comforting and joyful words in journalism than ‘Don’t worry, David McCraw is here.’ McCraw is a national treasure, the reason why so many great articles have appeared, and a legal and moral force for justice and truth.”
—Charles Duhigg, Pulitzer Prize winner and author of The Power of Habit

“McCraw guides us to the front lines of the fight for press freedom, bringing much-needed perspective to the dangers emanating from the current occupant of the White House. Through stories involving the toughest calls in journalism, he gives us an entertaining civics lesson in the First Amendment, deepening our understanding of how press freedoms have enriched our democracy.”
—Andrew Longstreth, New York Law Journal

“If the worst fears some have about the crumbling of American institutions were to come to be, this book would stand as a chronicle of what happened and how.”
—Ashley Messenger, The Media Law Letter

“McCraw, the deputy general counsel of the New York Times, recounts 17 years of defending the First Amendment and the paper’s legal integrity in this passionate memoir. Best known for a letter he wrote responding to a lawsuit threat from President Trump about a report detailing groping accusations against him from two women, McCraw colors his legalese with wit and levity…News junkies will relish the insider access.”
—Publishers Weekly

“A passionate, important defense of the First Amendment and its absolute necessity in a democracy.”
—Kirkus Reviews