Far Side of the Moon: The Story of Apollo 11's Third Man (Hardcover) 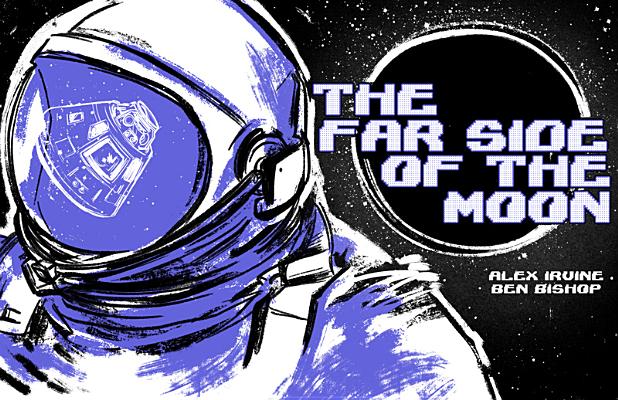 A unanimous selection to the 2018 Maverick Graphic Novel List!

This graphic retelling of the Apollo 11 moon-landing mission follows astronaut Michael Collins, commander of the lunar orbiter, to the far side of the moon.

When the Earth disappears behind the moon, Collins loses contact with his fellow astronauts on the moon’s surface, with mission control at NASA, and with the entire human race, becoming more alone than any human being has ever been before. In total isolation for 21 hours, Collins awaits word that Neil Armstrong and Buzz Aldrin have managed to launch their moon lander successfully to return to the orbiter—a feat never accomplished before and rendered more problematic by the fuel burn of their difficult landing. In this singularly lonely and dramatic setting, Collins reviews the politics, science, and engineering that propelled the Apollo 11 mission across 239,000 miles of space to the moon.

Ben Bishop (Portland,ME) is a comic creator who wrote, illustrated,and self-published his first book, the graphic novel Nathan the Caveman,in 2008. In 2011 he provided the illustrations for the award-winning book The Lost Trail, a graphic novel retelling of the famous Donn Fendler story Lost on a Mountain in Maine. Most recently Ben illustrated a short story for Archaia’s The Reason for Dragons and provided cover artwork for IDW’s Teenage Mutant Ninja Turtles series.

While Neil Armstrong and Buzz Aldrin are
household names, “the only thing most people know about Michael Collins is that
he didn’t get to walk on the moon.” Irvine and Bishop aim to remedy that with
this graphic biography, which traces Collins’s upbringing and NASA career
through his selection for the Apollo 11 mission and his life afterward.
Bishop works in a rough, schematic style, and his liberal use of swaths of
black, accented with violet, makes the vastness of space felt in nearly every
panel.
— PW

The Far Side of the Moon is a black-and-white nonfiction graphic novel about astronaut Michael Collins and the historic Apollo 11 moon-landing mission of 1969. The stark, visually striking artwork captures the loneliness and dangers of space travel. Readers of all ages will find The Far Side of the Moon a captivating and inspirational true story not only of scientific history, but also of human fortitude and ingenuity.