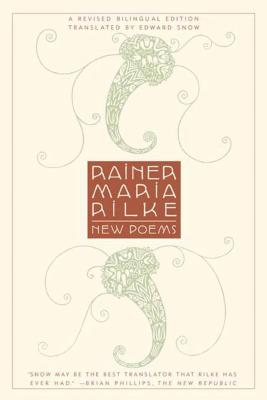 When Rainer Maria Rilke arrived in Paris for the first time in September 1902, commissioned by a German publisher to write a monograph on Rodin, he was twenty-seven and already the author of nine books of poems. His early work had been accomplished, but belonged tonally to the impressionistic, feeling-centered world of a late-nineteenth-century aesthetic.

Paris was to change everything. Rilke's interest in Rodin deepened and his enthusiasm for the sculptor's "art of living surfaces" set the course for his own pursuit of an objective ideal. What was "new" about Rilke's New Poems, published in two independent volumes in 1907 and 1908, is a compression of statement and a movement away from "expression" and toward "making realities." Poems such as "The Panther" and "Archaic Torso of Apollo" are among the most successful and famous results of Rilke's impulse.

This selection from both books unites the companion volumes in a torrent of brilliant work intoxicated with the materiality of the world. Edward Snow has now improved upon the translations for which he received the Harold Morton Landon Translation Award and with which he began his twenty-year project of translating Rilke.

“Snow may be the best translator that Rilke has ever had.” —Brian Phillips, The New Republic