A Mayor for All the People: Kenneth Gibson's Newark (Hardcover) 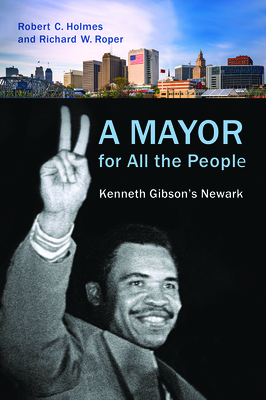 In 1970, Kenneth Gibson was elected as Newark, New Jersey’s first African-American mayor, a position he held for an impressive sixteen years. Yet even as Gibson served as a trailblazer for black politicians, he presided over a troubled time in the city’s history, as Newark’s industries declined and its crime and unemployment rates soared.

This book offers a balanced assessment of Gibson’s leadership and his legacy, from the perspectives of the people most deeply immersed in 1970s and 1980s Newark politics: city employees, politicians, activists, journalists, educators, and even fellow big-city mayors like David Dinkins. The contributors include many of Gibson’s harshest critics, as well as some of his closest supporters, friends, and family members—culminating in an exclusive interview with Gibson himself, reflecting on his time in office.

Together, these accounts provide readers with a compelling inside look at a city in crisis, a city that had been rocked by riots three years before Gibson took office and one that Harper’s magazine named “America’s worst city” at the start of his second term. At its heart, it raises a question that is still relevant today: how should we evaluate a leader who faced major structural and economic challenges, but never delivered all the hope and change he promised voters?

ROBERT C. HOLMES is a clinical professor of law at Rutgers University. He served in the Gibson administration as executive director of the Newark Housing Development and Rehabilitation Corporation, then was later named executive director of the Newark Watershed Conservation and Development Corporation. He has also served as Assistant Commissioner of the New Jersey Department of Community Affairs and as a Partner in the law firm Wilentz Goldman and Spitzer.

RICHARD W. ROPER is a policy consultant whose many positions in local, state, regional, and federal government agencies also included stints as director of the Program for New Jersey Affairs and assistant dean of Princeton University's Woodrow Wilson School of Public and International Affairs. He later served as planning department director at the Port Authority of New York and New Jersey and as a Senior Fellow at the Rockefeller Institute of Government at the state University of New York.

“Kenneth A. Gibson was a trailblazer who set the stage for every African-American elected official in this state as well as many places around the country...He led our city in a difficult time as Newark tried to recover from the 1967 Rebellion. He will be remembered in his effort to live up to his own words: ‘Wherever the country is going, Newark will get there first....This book brings together many reflections of people who joined him and worked with him to transform Newark. Ken Gibson is an urban American titan, and this book will place him before a greater audience, who will understand and see him in terms of the vision he had and the context he deserves.”
— Ras J. Baraka

"Absolutely fascinating! A Mayor for All the People offers a fine grained, kaleidoscopic portrait of Kenneth A. Gibson as mayor of Newark, New Jersey. Elected in the first generation of black mayors of major American cities at a pivotal historical juncture, Gibson was both individual and symbol, an engineer without political experience as well as an emblematic figure caught in the era's irreconcilable hopes and conflicts. It's all here, as told by thoughtful people who were there.”

"A Mayor for All the People is an extraordinary exploration of the complex legacy of Newark’s first black mayor, Ken Gibson. Resisting the temptation of hagiography, this collection of essays examines Gibson’s achievements and his failures—the hopes invested in his election and the bitter disappointment that followed. Anyone interested in the history of Newark – and of black politics during this period – must read this book."

"The significance of Kenneth Gibson's election nearly 50 years ago as one of America's first African-American mayors of a major city continues to reverberate today. In Newark and cities like it across the country, empowering the voices of black and brown residents in electoral politics continues as a front-burner issue, epitomized by Newark's current home-grown Mayor, Ras J. Baraka, who followed in Gibson's tradition with the campaign promise that "when I'm mayor, you're the mayor." Here in this masterfully produced volume, we see those voices emerge, powerfully, across time and generations, to contextualize the complexities facing Newark's first black mayor while never losing sight of the extraordinary scale of his accomplishments. In these pages resides wisdom that is not merely historical, but intensely immediate as we consider the work that remains for us to do in transforming our politics to achieve a more just society."

"A fascinating exploration of the challenges, defeats and hard-won victories during a remarkable period in the history of Newark, New Jersey's largest city under the leadership of its first black mayor. The diverse vantage points of the essays in this thoughtfully framed volume provide a unique and rich look into the groundbreaking tenure of Kenneth A. Gibson."

"The years of Ken Gibson are a testament to the city’s resilience. The voices in this volume recall the good and the bad, the successes and disappointments. A Mayor for All The People is a potent reminder that in times of crisis and disruption, the first prerequisite for recovery is for people to come together."
— Roger J. Cohen