All the Poems: Stevie Smith (Hardcover) 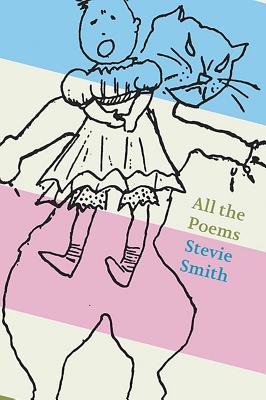 The essential edition of one of modern poetry’s most distinctive voices: all Stevie Smith’s flabbergasting poems, now in paperback

Stevie Smith is among the most popular British poets of the twentieth century. Her poem “Not Waving but Drowning” has been widely anthologized, and her life was celebrated in the classic movie Stevie. This new and updated edition Stevie Smith’s collected poems includes hundreds of works from her thirty-five-year career. In addition to discovering never-before-published verses, the Smith scholar Will May gathers the poems and illustrations from all her published volumes, provides fascinating details about their provenance, and describes the various versions Smith presented. Satirical, mischievous, teasing, disarming, Stevie Smith’s poems take readers from comedy to tragedy and back again, while her line drawings are by turns unsettling and beguiling.

Stevie Smith (1902-1971) was born in Hull, England, but when she was three she moved with her parents and sister to Avondale Road in Palmers Green. Here she stayed for over sixty years, after her parents’ death living with her beloved “Lion Aunt.” She was the author of three novels and a dozen collections of poetry. Although baptized Florence Margaret Smith, she was nicknamed Stevie after Steve Donoghue the jockey.

Will May is author of Stevie Smith and Authorship (Oxford University Press, 2010)

A rare bird, a Maltese falcon. A more individual talent than Stevie Smith’s you don’t get.
— Clive James - The New Yorker

A poet who deserves a place, among her follow modernists, as one of the best, silly-serious, funny-sad, mock mock-heroic poets of our time.
— Angela Leighton - The Times Literary Supplement

Now, forty-five years after her death, bound inside this large annotated collection, [Smith] can be celebrated as a major English poet of the twentieth century. She is a writer of astonishing skill, range, comedy, and depth of feeling; she is inimitable, strange, and utterly original.
— Hermione lee - The New York Review of Books

That sense of the uncanny, the unheimlich or the peculiar, the grip of childhood terrors, the chance—perhaps our greatest fear—of never being known, the intimacy of wickedness, they are all here, in these poems.
— Cynthia Zarin - New Yorker

Smith’s great gift is to sit on our shoulder like a feisty bird that’s traveled a long distance, has been half starved on the way, and hopes your map will be a different from hers.
— Barbara Berman - The Rumpus

My senses sharpen at the words of Stevie Smith.
— Morrissey

I am a desperate Stevie Smith addict.
— Sylvia Plath

There is variety and inventiveness, much humor and understanding and a constant poignancy. Her gift was to create a peculiar emotional weather between the words, a sense of pity for what is infringed and unfulfilled. Death, waste, loneliness, cruelty, the maimed, the stupid, the innocent, the trusting—her concerns were central ones, her compassion genuine and her vision almost tragic.
— Seamus Heaney