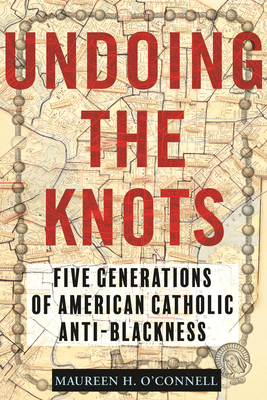 An excavation of White American Catholic anti-blackness and the spiritual resources needed to resist its inheritance.
Maureen O'Connell was raised by devoutly Catholic parents with a clear moral and civic guiding principle: those to whom much is given, much is expected. Descended from five generations of Irish Catholic Philadelphians, for most of her life, she thought that to be holy she needed to be good and give back. O'Connell became a theologian steeped in social ethics, engaged in critical race theory, and trained in the fundamentals of anti-racism. And yet, still she found herself failing to see how her well-meaning actions affected the Black members of her congregations, and Black members of her university community. It seemed that whenever she tried to undo the knots of racism, she only ended up getting more tangled up in them.

Excavating her Irish Catholic family's entanglements with race and racism from the time they immigrated to America to the present, O'Connell traces, by implication, how the larger Irish Catholic population became white and why, despite the tenets of their faith, so many white Catholics have lukewarm commitments to racial justice. Undoing the Knots weaves together narrative history, theology, and critical race theory in an attempt to begin undoing these knots: to move away from doing good and giving back, to dismantling the white Catholic identity and the economic and social structures it has erected and maintained.

Maureen H. O'Connell is Associate Professor of Christian Ethics at LaSalle University. She authored Compassion: Loving Our Neighbor in an Age of Globalization (Orbis Books, 2009) and If These Walls Could Talk: Community Muralism and the Beauty of Justice (The Liturgical Press, 2012). She is a member of POWER (Philadelphians Organizing to Witness, Empower, and Rebuild), an interfaith coalition of more than 50 congregations committed to making Philadelphia the city of "just love" through faith-based community organizing.