In Pursuit of Utopia: Los Angeles in the Great Depression (Hardcover) 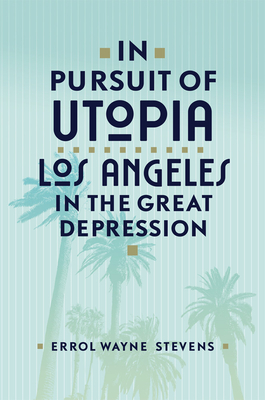 During the Great Depression, the Los Angeles area was rife with radical movements. Although many observers thought their ideas unworkable, even dangerous, Southern Californians voted for them by the tens of thousands. This book asks why.

To find answers, author Errol Wayne Stevens takes readers through the history of such movements as the Utopian Society, Dr. Francis Townsend's old-age revolving pension plan, Upton Sinclair's End Poverty in California gubernatorial campaign, and Retirement Life Payments, known as Ham and Eggs. The book also examines the Los Angeles Communists and the free-market capitalists, both quasi-religious movements with large followings, as well as the self-help cooperatives, a spontaneous upsurge of neighbors who came together to help one another in a time of desperate need.

As to these movements' extraordinary popularity, Stevens finds the standard explanations unpersuasive. He debunks the idea that na ve, unsophisticated Southern Californians, living aimless, empty lives, suffering from ennui, and longing for community, readily supported charismatic leaders who promised a way out of the Great Depression. In Stevens's telling, Southern Californians supported these movements because they spoke to their needs. Fearful or desperate, some elderly and hopeless, Angelenos cared less about the programs' feasibility than about their promise of relief. As one Ham and Eggs supporter succinctly explained: "It may be a racket and maybe it won't work more than a couple of weeks, but that will be $60 more than I ever got before for one vote."

Finding parallels between past and present, readers might wonder why people remain loyal to programs that prove unrealistic, or why voters continue to support leaders who reveal, time and again, their ignorance or dishonesty. In its illumination of a troubled time in American history not so long ago, this book offers insight into our own.