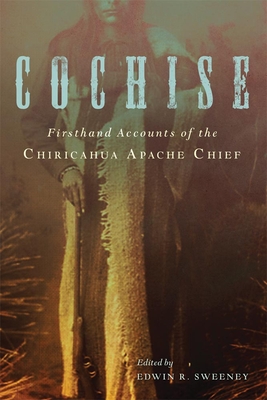 A Chiricahua Apache of the Chokonen band, Cochise (c. 1810-1874) was one of the most celebrated Indian leaders of his time, battling both American intrusions and Mexican troops in the turbulent border region of nineteenth-century Arizona.

Much of what we know of Cochise has come down to us in military reports, eyewitness accounts, letters, and numerous interviews the usually reticent chief granted in the last decade of his life. Cochise: Firsthand Accounts of the Chiricahua Apache Chief brings together the most revealing of these documents to provide the most nuanced, multifaceted portrait possible of the Apache leader. In particular, the interviews, many printed here for the first time, are the closest we will ever get to autobiographical material on this notable man, his life, and his times.

Edwin R. Sweeney, a preeminent historian of the Apaches and their leaders, has assembled this collection from U.S. military records, Indian agency reports, U.S. and Mexican newspapers and journals, and transcribed personal recollections. Throughout we hear the voices of those who knew Cochise well or observed him firsthand, including one who had never met his equal with a lance and another who attested that no Apache warrior can draw an arrow to the head and send it farther with more ease than he. We get two distinctly different views of the murderous events that led to the infamous Bascom Affair, in which Cochise and an American lieutenant squared off in a spiraling war of revenge. And we gain rare and unexpected insight into Cochise's thoughts during the Chiricahuas' move to the reservation at Tularosa.

In addition to a close-up picture of a pivotal figure in western history, Cochise offers accounts of a vanished world from people who lived in that world.