Lincoln and His Boys (Hardcover) 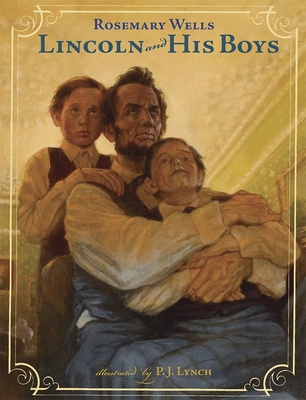 An intimate, moving portrait of Abraham Lincoln as rarely seen—through the eyes of his children—and captured in exquisite illustrations.

Historians claim him as one of America’s most revered presidents. But to his rambunctious sons, Abraham Lincoln was above all a playful and loving father. Here is Lincoln as seen by two of his boys: Willie, thrilled to be on his first train trip when Lincoln was deciding to run for president; Willie and Tad barging into Cabinet meetings to lift Lincoln’s spirits in the early days of the Civil War, Tad accompanying him to Richmond just after the South’s defeat. With the war raging and the Union under siege, we see history unfolding through Willie’s eyes and then through Tad’s — and we see Lincoln rising above his own inborn sadness and personal tragedy through his devotion to his sons. With evocative and engaging illustrations by P.J. Lynch, Rosemary Wells offers a carefully researched biography that gives us a Lincoln not frozen in time but accessible and utterly real.
Back matter includes an author’s note.

Rosemary Wells is an author and illustrator of picture books and has written many novels and nonfiction books for young readers, including Mary on Horseback, a biography of Mary Breckenridge that won the Christopher Medal. While researching a historical novel about the Civil War, she came upon a 200-word fragment by Willie Lincoln about a trip taken with his father, and the idea for Father Abraham was born. She lives in Connecticut.

PJ Lynch is an Irish artist who has illustrated several books with American themes, including The Christmas Miracle of Jonathan Toomey and When Jessie Came Across the Sea. To illustrate Lincoln and His Boys, he traveled with Rosemary Wells to the Lincoln Museum in Springfield, Illinois, and assembled hundreds of contemporary photographs, daguerreotypes, and etchings of Lincoln. He lives in Dublin.

Introduces the legendary president through the perspectives of his youngest children, Willie and Tad…Rarely does a biography so robustly engage the audience's emotions.
—Publishers Weekly (starred review)

Captures moments in time, from a child's perspective, in a very momentous life.
—Books4YourKids

This is the story of real people, real children, a real family, as told from the perspective of Lincoln's sons Tad and Willie.
—PlanetEsme