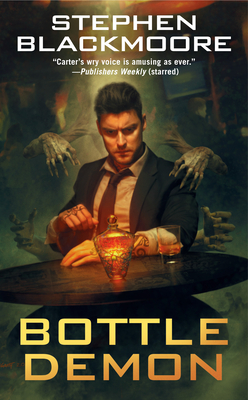 By Stephen Blackmoore
$7.99
Usually arrives at our store in 2-8 business days.

This is book number 6 in the Eric Carter series.

The sixth book of this dark urban fantasy series follows necromancer Eric Carter through a world of vengeful gods and goddesses, mysterious murders, and restless ghosts.

After being attacked by a demon in the one place he thought he was safe, Eric Carter has been killed, his soul sent to take its place as a stand-in for the Aztec god of death Mictlantecuhtli. But somebody on Earth isn't done with him, yet. Somebody with the power to bring him back from the dead. He doesn't know who, and worse he doesn't know why.

Between an angry death goddess, family secrets steeped in blood, a Djinn who's biding his time, and a killer mage who can create copy after copy of himself, Eric's new life looks to be just as violent as his last one. But if he doesn't get to the bottom of why he's back, it's going to be a hell of a lot shorter.

Stephen Blackmoore is a writer of crime, horror, and urban fantasy whose work has appeared in the magazines Needle, Plots With Guns, Spinetingler, Thrilling Detective, Shots, and Demolition. He has also written essays on LA politics and crime for the website LAVoice.org and the LA Noir true crime blog.

Praise for the Eric Carter series

"Demons and dark magic and gods of death: what's not to like? Blackmoore's hard-charging prose hits like a bullet fired from a cursed gun.... Fast becoming my favorite urban fantasy series, Broken Souls is a welcome addition to the necromancer chronicles of Eric Carter. Read this book. Read it now." —Chuck Wendig, author of Wanderers

"Carter’s wry voice is amusing as ever, but the grief he carries is palpable, adding depth and a sense of desperation to this action-packed adventure. Readers will be eager for more after this thrilling, emotionally fraught installment." —Publishers Weekly (starred)

"Ghost Money is reminiscent of Kevin Hearne’s Iron Druid series, pitting a powerful human magic-user against the gods, while use of the Aztec gods calls all the way back to Mercedes Lackey’s Diana Tregarde books. Blackmoore’s fast pace and no-holds-barred prose give him a unique place in the genre." —Booklist