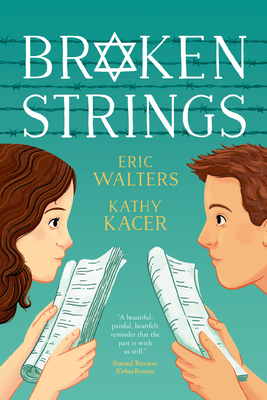 By Eric Walters, Kathy Kacer
$9.99
Usually arrives at our store in 2-8 business days.

A violin and a middle-school musical unleash a dark family secret in this moving story by an award-winning author duo. For fans of The Devil's Arithmetic and Hana's Suitcase.

It's 2002. In the aftermath of the twin towers -- and the death of her beloved grandmother -- Shirli Berman is intent on moving forward. The best singer in her junior high, she auditions for the lead role in Fiddler on the Roof, but is crushed to learn that she's been given the part of the old Jewish mother in the musical rather than the coveted part of the sister. But there is an upside: her "husband" is none other than Ben Morgan, the cutest and most popular boy in the school.
Deciding to throw herself into the role, she rummages in her grandfather's attic for some props. There, she discovers an old violin in the corner -- strange, since her Zayde has never seemed to like music, never even going to any of her recitals. Showing it to her grandfather unleashes an anger in him she has never seen before, and while she is frightened of what it might mean, Shirli keeps trying to connect with her Zayde and discover the awful reason behind his anger. A long-kept family secret spills out, and Shirli learns the true power of music, both terrible and wonderful.

ERIC WALTERS is one of Canada's best-known and most prolific writers of fiction for children and young adults. His books have won over 120 awards, including thirteen separate children's choice awards, as well as the Africana Children's Book Award, the UNESCO Award for Literature in Service of Tolerance and The Christopher Award. His books have been translated into thirteen languages. He lives in Guelph, Ontario, and is the co-founder of Creation of Hope, a charity that provides care for orphans in the Mbooni district of Kenya. In 2014 Eric was named a Member of the Order of Canada. His most recent novel is Elephant Secret, which is his hundredth published book. Visit him online at ericwalters.net and on Twitter: @EricRWalters.

KATHY KACER's award-winning list of Holocaust fiction and non-fiction for young readers includes The Secret of Gabi's Dresser (winner of OLA Silver Birch Award), The Diary of Laura's Twin (winner of the National Jewish Book Council Award [US] as well as the Canadian Jewish Book Award), Hiding Edith (winner of the OLA Silver Birch Award; the Sydney Taylor Book Award [Association of Jewish Libraries], Notable Book for Older Readers; and the Yad Vashem Award for Children's Holocaust Literature [Israel]), and To Look a Nazi in the Eye (a Sydney Taylor Honor Book for Teens). Her books have been published and translated in twenty countries. She is the child of Holocaust survivors, and the parent of two actors and musical theater performers. For more information, please see: www.kathykacer.com.

“Shirli's voice is true and strong as she narrates her own tale of rehearsals, her very ethnically diverse friendships, her deep distress as she witnesses Zayde's pain, and her joy as he reconnects with his music. A beautiful, painful, heartfelt reminder that the past is with us still.” --Kirkus Reviews, starred

“Walters and Kacer pull of this impressive feat of complex storytelling and make it look easy . . . . [It is an] honest, open and unflinching [story] about some of the more dark and traumatic aspects of history.” --Quill & Quire, starred

“Broken Strings does a great job of combining a wide variety of interests — history, musical theatre, music, romance, realistic fiction — in one well-paced story. It’s a book with heart, and one that will definitely be added to my school library collection.” --CM Magazine

“Middle grade readers will have learned a great deal about the inhumanity of Nazism, as well as about the scars left on their victims. They will also come away with a sense of the damaging effects of silence, and the hope that, at least sometimes, burdens can be shared.” --Jewish Book Council

“A tale that teaches both history and compassion; a great choice for middle grade readers.” --School Library Journal

"The author has interwoven threads of the response to the terrorism of the Twin Towers, reaction to immigrants and racial prejudices, and teenage anxieties into the story, each with a gentle touch. There is much food for thought provided by this book.” --Resource Links