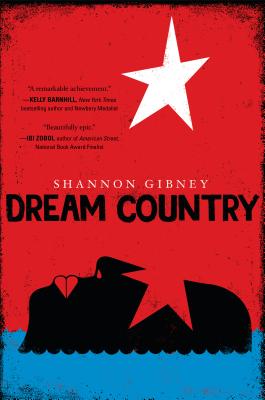 The heartbreaking story of five generations of young people from a single African-and-American family pursuing an elusive dream of freedom.

Dream Country begins in suburban Minneapolis at the moment when seventeen-year-old Kollie Flomo begins to crack under the strain of his life as a Liberian refugee. He's exhausted by being at once too black and not black enough for his African American peers and worn down by the expectations of his own Liberian family and community. When his frustration finally spills into violence and his parents send him back to Monrovia to reform school, the story shifts. Like Kollie, readers travel back to Liberia, but also back in time, to the early twentieth century and the point of view of Togar Somah, an eighteen-year-old indigenous Liberian on the run from government militias that would force him to work the plantations of the Congo people, descendants of the African American slaves who colonized Liberia almost a century earlier. When Togar's section draws to a shocking close, the novel jumps again, back to America in 1827, to the children of Yasmine Wright, who leave a Virginia plantation with their mother for Liberia, where they're promised freedom and a chance at self-determination by the American Colonization Society. The Wrights begin their section by fleeing the whip and by its close, they are then the ones who wield it. With each new section, the novel uncovers fresh hope and resonating heartbreak, all based on historical fact.

In Dream Country, Shannon Gibney spins a riveting tale of the nightmarish spiral of death and exile connecting America and Africa, and of how one determined young dreamer tries to break free and gain control of her destiny.

Shannon Gibney is an author and university professor. Her novel See No Color, drawn from her life as a transracial adoptee, was hailed by Kirkus as "an exceptionally accomplished debut" and by Publishers Weekly as "an unflinching look at the complexities of racial identity." Her essay "Fear of a Black Mother" appears in the anthology A Good Time for the Truth. Her sophomore novel, Dream Country, received five starred reviews and earned her a second Minnesota Book Award. She lives with her two Liberian-American children in Minneapolis, Minnesota. www.shannongibney.com and @gibneyshannon

"Dream Country is gut wrenching and incredible.”—Sabaa Tahir, #1 New York Times bestselling author of An Ember in the Ashes

"This story, both sprawling and intimate by turns, is a miracle of construction, and Gibney fits its diasporic pieces the way a master should—with a keen eye, an open heart, a courageous spirit, and a sharp, sharp needle. This novel is a remarkable achievement."—Kelly Barnhill, New York Times bestselling author and Newbery Medalist

"Gibney has masterfully woven together the histories of America and Africa through the multigenerational journeys of young people in search of home and self. Beautifully epic, timely, and outstanding in its breadth and scope, this story truly conveys what it means to be African American."—Ibi Zoboi, author of American Street, National Book Award Finalist

★"Gibney blesses the reader with a marvelous literary tapestry of family, sacrifice, and dreams examining the lingering effects of slavery and racism in both the U.S. and Liberia. This powerful novel demonstrates how nonlinear history can be, ways the present is a consequence of the past, and that, though traumatized people can sometimes hurt others when trying to heal themselves, there’s nevertheless strength in hope that can keep us moving forward."—Booklist, starred

★"[H]ighlights the inconsistencies between the beliefs a country projects to the world at large and the realities experienced by immigrants.... An excellent choice."—SLJ, starred

★"[A]lthough each story could exist on its own to great effect, the ways they inform one another are historically grand and intimately detailed."—BCCB, starred

"Dream Country asks big questions and exposes new histories as it digs into the complexities of what Gibney calls 'the ongoing, spiraling history of the African-African American encounter'."—Minneapolis Star Tribune

"A vast and epic tale that explores racism, slavery, war, refugees, immigration, and what it means to be African-American as a whole.”—Bustle

"[A]n illumination of how humans end up treating each other cruelly and how they resist."—The Horn Book

“Shannon Gibney has taken history and imagination and gelled them into a time machine. Here is tragedy and survival, struggle and love, rendered with precision and an empathy born of a writer who has experienced the ‘dream-loop’ of history. Sometimes a story can't promise healing, or neat closure. Sometimes a story, even a magical one like this, is the necessary reopening of a wound.” —Bao Phi, award winning author of A Different Pond and Thousand Star Hotel

"Dream Country is a gift of storytelling, of culture, and of understanding for an America that needs this book desperately. Through stories woven of manhood and humanity, of growing up and growing into oneself, Gibney shows us how the worlds between us grow wider even as our world grows smaller. She takes us through time and space to find the heart of an imperfect home."—Kao Kalia Yang, award winning author of The Latehomecomer

"Dream Country is not just the story that needed to be told. In both its specificity and its universality, Shannon Gibney’s majestic text is the conversation that we needed to have. It is the multiple truths that we needed to explore. One certain way to ensure more powerful tomorrows is to fill our todays with words and ideas like hers.”—Cornelius Minor, teacher and author of We Got This: Equity, Access, and the Quest to Be Who Our Students Need Us to Be

"Gibney’s complex look at one family, told through a wide scope, is moving and unlike anything I have ever read before in YA. This is one of the best books I’ve read this year. Don’t miss it.—Teen Librarian Toolbox

"Truly a tour de force and an outstanding example of what young adult literature can do when it stretches and takes risks and is in the talented, careful, passionate hands of a master writer."—Angie Manfredi, Nerdy Book Club